I enjoy a good rant, most of my friends will tell you. I’m somewhat infamous for having a rant or two on Facebook. I’ve decided that Friday’s will be my day, when I will climb onto my soap box, and rant on my blog.

Here are this weeks rants….

First rant of the week:

it’s school shoe shopping time, again. My 5-year-old has fallen prey to marketing. She has seen the Lelli Kelly shoe adverts on Channel 5, when we let her watch Milkshake instead of Cbeebies (one of the reasons I love Cbeebies is there are no adverts) and has been asking for a pair of their shoes for months. She particularly was pestering me for the school shoes they’ve been promoting. I totally understand where she is coming from. They do make pretty shoes. She’s quite a girly girl and she likes them. I distinctly remember having a very tearful argument with my own mother, in Clark’s shoe shop, when I was about 6 years old, because I wanted a particular pair of shoes, that had a hint of a heel and adjustable straps that meant you could pretend you were almost wearing grown up, strapless, high-heeled shoes. I know how she feels, I’m sympathetic. But there is NO WAY im paying nearly £20 more for a pair of school shoes that will be scuffed, worn and generally beaten about, simply because they come with a sparkly interchangeable strap, and a pot of lip balm.

These are the shoes she wanted: http://www.lellikellyshop.co.uk/index.php?route=product/product&path=37&product_id=200 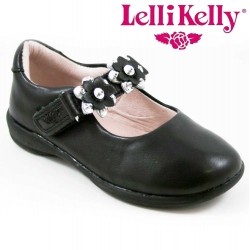 These are what we bought. 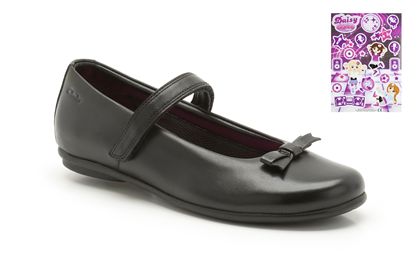 She actually is very happy with them: The Lelli Kelly’s are £49.00, the Clark’s are £30. We also got gym shoes, and still didn’t pay as much as we would have for the LK shoes.

My rant is really with Lelli Kelly. Yes, you make lovely shoes, but SERIOUSLY, I’m over the marketing, and trying to snaffle my child so she pesters me to spend more  for your shoes. They don’t fit that well, and frankly, are overrated. Their cheesy advertising, and persuasive methods clearly worked here. We compromised. She got Clarks shoes, my bank account breathed a sigh of relief, and she was happy to go and choose a lip balm and some hair clips from Claire’s Accessories. I have said that when she next needs a pair of casual shoes, I MIGHT think about letting her get a pair of Lelli Kelly’s, or I might chat to my Dad about buying her a pair for Christmas (Granddad being allowed to spoil her, Mummy does the practical stuff)

No offense if you actually buy and love these shoes, but I was not about to cave. Not at that price!

Second rant of the week:

Selfish people who call the police on Thames Water/Drain cleaner’s.

We live in an area with some old plumbing/water pipe networks. We had a lot of rain recently, and the drains have been struggling. I noticed yesterday that our kitchen drain outside, was flooding over. Fortunately it was just the kitchen drain from the dishwasher, washing machine and sink, so it wasnt anything too nasty. However, I know that when this happens, it means that the main drain, out in the street is probably blocked. It’s happened twice before.

I did my duty, and rang Thames Water, our supplier. They were very nice, helpful and said someone would come out within 24 hours, to establish if it was our drain, or the main supply drains that were the issue. I went to bed, thought nothing more of it. At 2am, I woke up to blue lights and sirens in the road parallel to our road. I went back to sleep, we often hear the police, we live near an “interesting” council estate, (dog fighting, various different gang wars, just your usual stuff)

When I woke up this morning, I saw our drains had become unblocked, and thought that they’d sorted themselves, so I made a note to ring Thames Water so someone didn’t need to come out and waste a trip.

As I went out this morning, I saw a man sitting in a van, from Thames Water. I went to chat to him, to see if he was the person coming to see us. He wasn’t, but he had been called out to deal with a blocked mains drain, sewage flooding into two gardens, and water leaking all over the road in the road next to ours. He said our blocked drain was probably linked. He then told me that he and another team had been called out at 12am,  to deal with the problem, had arrived, started to pump the drains, and clear the blockage, and drain the sewage water flooding the two gardens, but SOME IDIOT in the road apparently didn’t like the noise they were making and called the police (it isn’t a quiet job to clear drains and pump sewage water, I’ll grant you that, but seriously? ) The police came out, and apparently intervened, after speaking to Thames Water, and the men were allowed to carry on, but I am horrified. What a waste of police time! Don’t mind me, while I sleep soundly, undisturbed by noise, while my neighbour swims in sewage that’s pouring into their garden and under their kitchen door, is apparently the attitude. Unfortunately, where we live, there are a small group of people who seem to think they are special, and they cause a lot of issues local, objecting to plans for building work, harassing the council, and generally trying to bend the rules and annoy the rest of us. Brad Pitt and Angelina don’t know what they’ve let themselves in for moving here. (yes, they own a house in the road parallel to us, and yes, she is just as gorgeous in real life as she is in films. I havent seen him yet)

People who play with their mobile phone ringtone on buses

Why? Do they not know how annoying it is, to play with and change the ringtone on their phones, not once, not twice, but seventeen times. Yes, I counted.  This lady, on the bus today, decided she was bored, unhappy with her choice of sounds on her phone, and changed the tone seventeen times. Playing each tone, loudly. I’m not sure why she was struggling with what tone to choose, but I was bored with the choices by the time I got off the bus. Maybe I shouldnt be bothered, or annoyed, but it was annoying. The other passengers were also bothered and annoyed, and not particularly entertained with the skipping through random pop songs and annoying beeping sounds as we merrily travelled.

Those rants were relatively mild, for me. I’m tired, it’s been  long day. I’m sure next Friday will bring me more material to spew forth, a bit like the sewage leaking from the drains into the poor person down the road’s garden and kitchen at 12am last night…

Off my soap box, time for a glass of wine, and some mindless tv. Have a good weekend everyone!

Spread the love
Posted in Friday's Rants from The Soap Box.

Sorry twitter I started watching Bridgerton this evening but couldn’t get into it. I feel as if I’ve failed lockdown

I’ve never watched The Never Ending Story with my kids because I watched it as a child and it traumatised me. I can’t explain why. Suspect now because the character is motherless I can’t get my head round it. Is that weird?

I need a slide able pop grip or pop socket for my work phone. The slide ones on the pop socket official site get really bad reviews. Need to be able to wireless charge the phone. Can anyone recommend another brand?