Yup, that’s what he said! I was slightly horrified, and felt a bit mortified. We don’t over feed our cats. We don’t feed them the “posh” cat food, that you buy from the vets, simply because Layla wont eat it. (We’ve tried, we tried slowly mixing it into her old food, leaving it and not giving her alternatives, etc.  but she won’t touch it. Last time we tried, she simply turned her nose up at it, and then went next door and ate my neighbours dog food instead – please note, next door’s dog is a rather large, slightly lively Alsatian, who is TERRIFIED of Layla, and lets her eat her food) so we gave up spending a fortune on the posh, nutritious stuff, and buy the cheap brands and she is a happy camper.

But we couldn’t work out why she was overweight. We don’t feed the cats scraps, they don’t get treats when they scrounge, although they would like to eat what we eat, we don’t usually allow it. We figured she must have been going elsewhere to eat. I checked with my neighbour, Kim, and she told me she now only feeds her dog inside, so Layla be getting food there, so we thought she must be filching food from some other poor unsuspecting cat or cats.

She has gained 457 grammes since September. That is approximately 1lb give or take. That doesn’t sound a lot, but the cat to human equivalent would be 14lb or 6kg thereabouts  which is quite a lot. Like with humans, being overweight isn’t healthy for a cat, especially as they age, and Layla is 7 now, technically middle aged. The vet did say a small amount of weight gain was normal in the winter, but not 400g!

So, we were puzzled. Until that is, I popped round the corner, to the building site, that is our neighbours on the other side of us. We have become quite friendly with the builders there, Small Boy has spent a lot of time watching the diggers and cement mixers, and they have let him sit inside one of the diggers, which made his week, and they often stop to chat to us, when we go past, as they reconstruct the house that has been knocked down and rebuilt. I had gone round to get some information for a friend who was looking for a building contractor, and while I was there, chatting to the site manager, lo and behold, who should saunter in, but Layla…. Basically, she is, as my Dad put, a bit of  a tramp. She has made friends with the Polish builders on the site, and they in turn, feed her. She was being adorable, friendly, affectionate, (all things she normally isn’t, the Vet calls her Darth Vader, in fact she is probably normally even less friendly and personable than the great Dark Lord, to be honest) and basically was sucking up to them. She even let one of them PICK HER UP! Normally I am the only person accorded such an honour. I was both horrified and amused. They think she is marvellous  They have given her a Polish name, which I cannot pronounce, which means, “pretty cat”, I think, and apparently she has a taste for bacon sandwiches and all manner of Polish foods. I can’t blame her, I like Polish food myself, but sadly, I have had to put an end to the little love fest, food scrounging thing that she has had going on. The builders think it’s rather funny, but they did agree that them arriving in September, to start the work on the house, and Layla’s sudden weight gain were probably linked, and they have said they will resist her charms and stop feeding her Pierogi and all the other yummy goodies they bring for their meals. I have given them a bag of vet approved kitty treats, so they can maintain a friendship with their beloved pretty cat, and we are now hoping that as the building works come to a close, and as the weather warms up and she is out more and more active, that the weight will drop off.

So we think we have saved Layla from Kitty Weight-Watchers  for now. She goes back in March to see if she has lost any weight… She was not amused by her vet visit, she would have been even less amused by being put on a diet! 🙂 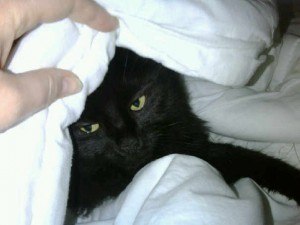 What do you mean I’ve got to go on a diet…? I’ll just hide then!

Posted in Everything else and tagged catfood, cats, diets, vet.