Yesterday, I had a calm, productive day planned. The children were going to their lovely child minder’s for a few hours, I was going into where I work, to do the mountain of admin that lurks in my cupboard, make some calls that need to be done without the accompanying typical telephone behaviour my children seem to put on when they know I am trying to have a sensible adult phone conversation, and do some bits and pieces before the terms starts for the groups I run.

Instead, we got as far as the bus stop across the road from us, and Small Boy, who had been running, tripped and fell. He didn’t cry, and he didn’t get up, like he normally does. I ran to him (I was about 5 feet away) and saw blood. I immediately thought he had hurt his mouth or nose, but when I picked him up, blood was gushing from his forehead. He was very dozy, and I think stunned, we aren’t sure if he actually lost consciousness for a few seconds, but he then started to look around, saw the blood pouring, and started to scream. I am standing by the side of a busy road, next to a bus stop, with a screaming child, blood everywhere…. this is not calm. I grabbed the first thing I could find in my bag to put on his wound (a clean pair of his underpants, if you must know, we still carry spares just in case) and a lady came over from the bus stop to help us. I don’t drive, I could see that the wound was gaping, and would likely need some attention from a doctor, and it was still bleeding a lot, and I was concerned that he had bumped his head quite badly. I told the lady to call 999 and I was able to speak to them operator and explain what had happened and that I needed to get Small Boy to A&E. They immediately sent a paramedic on a bike out to us, (he had been round the corner at the local secondary school) he came within minutes, examined a now enraged and very bloody Small Boy, and decided we needed to be taken to the hospital too. Shortly afterwards, an ambulance appeared (they had also been close by) and we were scooped up, and taken off to our local hospital. We are very fortunate to have a paediatric A&E, and it was relatively quiet and not busy, so he was seen, and assessed very quickly. Diagnosis: head wound, probably a mild concussion. Treatment: Glue (I am so glad they decided on this option, stitches would not have been fun) and an hour’s wait to observe him and see how he was. In the meantime, I had called LSH to come and get Big Girl (who was a star, throughout the whole thing, she was calm, she followed instructions – helping me to get things out of my bag to stop the bleeding, carrying bags, talking to Small Boy and helping him to calm down) and after his head wound was cleaned, glue applied, and they were happy he was alert, and not needing to be kept in for longer observation, we were sent home with spare dressings, a leaflet on head wound care, and instructions for me to watch him and look for signs that his head injury was more than minor. LSH arrived and we were home, cleaned up (I was covered in blood, head wounds can bleed so much, I looked like an extra from CSI, Small Boy didn’t look much less gruesome and the bus stop looked like a crime scene) and Small Boy and I spent the day cuddling on the sofa, eating chocolate buttons and watching whatever he wanted to watch. He was a bit grizzly, a little sleepy and grumpy, and we gave him pain relief and I kept a close eye on him. He is fine today, his head is a little sore, but he seems more back to his normal self.

I was glad to fall into bed last night, knowing that the day I had mapped out so carefully, had not gone at all to plan, but that things could have been much worse. I am very grateful for the help we received, the excellent care from the paramedic and ambulance staff, and the staff at the hospital. I am glad that Small Boy didn’t have a worse injury and that the slight concussion has eased. The best laid plans can fail, they did yesterday but all is well and we live to tell the tale, Small Boy is terribly pleased with the fact he got to ride in an ambulance and has glue on his head, and I have a few more grey hairs. I am sure they won’t be the last. 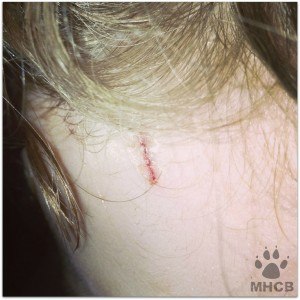 The head wound. It looked pretty horrible before it was cleaned and glued, was not a pretty site. 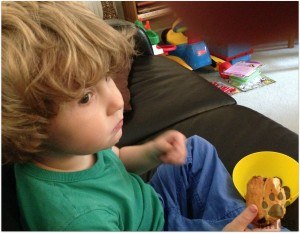 Not entirely sure what all the fuss was about, isn’t it normal to get rides in ambulances, and get to eat chocolate buttons and watch as much TV as I want, and have Mummy fuss over me? (after we got home)

On a side note, whilst I was a nurse, and know what to do in an emergency, and had ironically, just finished a first aid course, this week, I am somewhat worried that the lady that came to help us wasn’t sure how to call for help, and I had to talk her through calling 999 on her phone. I would encourage everyone to get some basic first aid training if they can (more on that in another blog post) but also to know how to get to and call 999 on your phone and what information to give to the operator. Whilst ours was not a life threatening situation, you never know what may happen, and those few minutes helping and calling for emergency help can make the difference if you are in a situation where someone is critically hurt or needing serious medical help.