So, having nursed the children and LSH through this really nasty flu bug, I of course succumbed this week. As Mummy’s don’t tend to get sick days (or feel they are able to take them – trying to rest with small children in tow, is that possible?) I have tried to potter on as much as possible, but have spent a fair amount of time resting, lurking in bed or the sofa, when LSH was at home, and the children have watched far too much TV this week.

Hopefully now, the lurgy has left us and normal service can resume. It is a horrible bug, and I am not sure how anyone can brush flu off as mild, or “not a huge thing” because I felt pretty much like death warmed over, and it has taken me a week to feel normal and LSH was so ill, as well. Fun times!

So, I am afraid photo offerings this week are few, but I did manage to take a few snaps from Instagram this week… 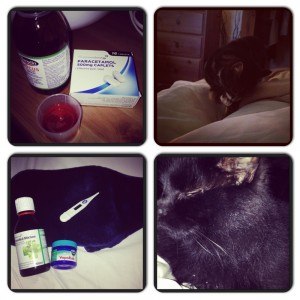 The evidence of sickness. Cough medicine, hot water bottle, thermometer and two cats who were delighted that they could cuddle me on the bed, in peace. 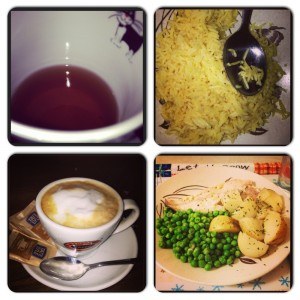 I have seriously been off coffee, which is totally unlike me. Gallons of herbal tea, with honey and ginger have been consumed. I am back on the coffee now, but sticking to decaff to see how I go. LSH has been cooking, and produced some rather marvellous meals, although I haven’t really felt like eat much. 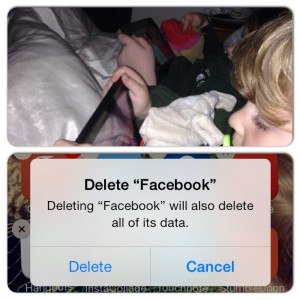 In an effort to reduce the amount of time I spend on Facebook, I deleted the app from my phone. I am hoping it will help me to be less active on there, and I will feel less stressed and anxious. I find too much information, oversharing, and other people’s opinions coming down in a continual feed hard to manage. I am guilty of all of the above and trying to get better at reducing all three too.

So, that is my paltry photo offering this week. Hopefully next week we will be back to normal. Big Girl is officially enrolled  in Brownies tomorrow night, and am writing some reviews for some gluten free goodies we have been sent to try. Lots of photos and food and coffee, normal service resumes!

Don’t forget to click on the linky to see other bloggers sharing their week in photos too. Thanks to Make Do and Push for hosting! 🙂