I am very excited about Christmas this year, and all the trimmings and festivities, despite the fact that Granddad (aka my Dad) is going to be away for the first time at Christmas in a long time)

I have downloaded Christmassy songs, got my Christmas candle all set up, and our Christmas tree will be up next weekend… Ho ho ho, bring on the season! 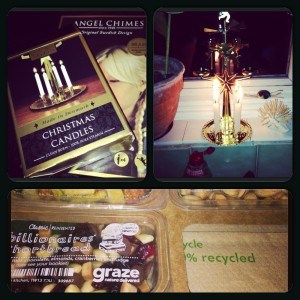 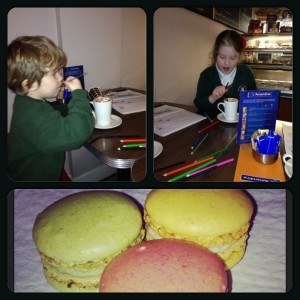 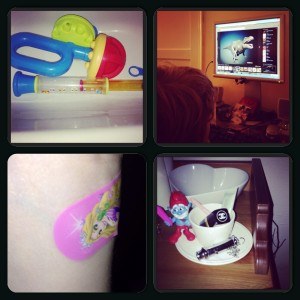 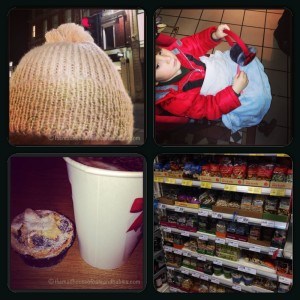 Parcels arrived. My Swedish Chime Christmas Candle, which has already become a favourite with the children, closely supervised of course. My first Graze box arrived, and we quite enjoyed the contents.

Small Boy was unwell for the first part of the week, but was better by Wednesday and we went out for tea. I may have eaten some rather good Macarons. I also had my first mince pie of the season, (told you the bah humbug was gone early) and was forced to wear a Disney Princess plaster, when we ran out of normal ones, much to the amusement of all my adult friends who all know I am not a big fan of Disney Princess stuff!

I had a rant about Tesco Express, who sell every kind of dried fruit, snack and nut variety known to man, but not normal packs of raisins. I don;t get the logic behind that. The children in my toddler group don’t dried wasabi peas or achai berries, they like plain, ordinary raisins!

We hunted high and low for ear muffs for Small Boy. He wanted red ones. It seems ear muffs for boys, or at least ones that aren’t pink and fluffy, are hard to find, but we managed to track down some ladybird ones, which made him very happy, and yes, I bought myself a bobble hat… Big Girl is not impressed, she thinks I am too old for such things as sparkly bobble hats! 🙂

That’s our week. Don’t forget to link up with Make Do and Push, for more photos from other blogs.

Hope you have had a lovely weekend!