This is not something I have blogged or even spoken about, to anyone, until recently. Don’t panic, though, I won’t be showing you photos of my Mummy Tummy, I think that would be taking being honest and open too far….

I have a Mummy Tummy, a lot of women do. The combination of weigh gain, then possibly not as much loss post birth as we would like, combined with carrying two pretty large babies, plus lack of exercise, meant that I have had more of a pooch than I would like. I assumed that it was mainly weight gain and poor muscle tone, until recently.

I have had some pain, under my ribs, on the left hand side, and into the centre of my abdomen. I assumed it was muscle strain and mostly ignored it. It didn’t go away, and I finally plucked up the courage to go and see my GP, who examined me and ran some tests. Much to my relief, the diagnoses wasn’t serious, but in fact in a way, quite positive. The pain was caused by muscle strain, due to an underlying cause.

I have what is known as a diastais recti, where my stomach (abdominal)  muscles have separated, and become so slack, caused by pregnancy, mainly. I have tried doing traditional sit ups and stomach crunches, and they hurt, but not in a “this is doing me good” sort of way, more in a “ow, that hurts, stop it” kind of way, and know I know why. Normal stomach exercises, for building muscle/adding tone, are actually ineffective for Diastasis Recti and can even do more damage. Now wonder it hurt when I tried. 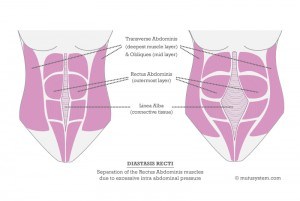 So, my GP referred me to a physiotherapist, who agreed with the initial assessment, and has give me exercises to do, correct ones, to help strengthen and tighten up my poor, sagging muscles, shown me how to cough and hold my stomach when lifting, to avoid further strain and damage, and also given me a special support belt to wear to help correct my posture. Apparently it is quite a common condition, and a lot of women have some issues particularly after several pregnancies. I had no idea, I had heard of it, but simply thought my Mummy Tummy was podge and lack of exercise, and that looking semi pregnant was normal for a middle aged mum of two who has gained weight and not made much effort to loose it.

My tummy will never be perfect, but I am hoping that the whole hand gap measurement that I am currently sitting at, in the space between my muscles, will eventually be reduced to a more acceptable 1-2 fingers width and that the pooch will improve and I will no longer feel so ashamed and uncomfortable about my Mummy Tummy. I would have just carried on, trying to do the wrong exercises and struggling with it. Knowing that we would like to have a 3rd baby, at some point, I feel less worried about the damage it might do, hopefully we can at least prevent further damage and I can strengthen the muscles before then. I can’t believe I have waited this long to do something about it. I was a little angry at first, that there seems to be so little advice or help on Diastasis Recti given during and after pregnancy, but at least I know now and can do something positive about it.

So, hopefully in a few months, I can wear clothes I feel comfortable in, and not feel like I look like I am pregnant, the exercises and also my Get Fit Mummy regime should help. WHo knows, I may even be able to wear a proper swimming costume again, when we go swimming, and not want to hide my body.

Here’s to saying good bye to the Mummy Tummy, or at least some of it! 🙂

This website has been very helpful, along with a sheet of exercises and do’s and don’t s my physiotherapist has give me!

Posted in Everything else and tagged Diastasis Recti, Exercises, Mummy Tummy, Physiotherapy, Pregnancy.

To fit with our Christmas in July event we thought we would share a video showing a few of our Christmas designs, can you spot a favourite? If you follow me on tiktok pop the video a like!!