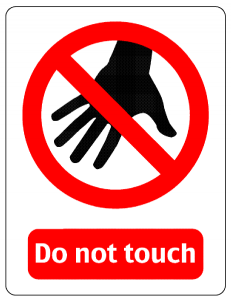 Even if you are stopping him from hurting himself??

On Monday, Little Man and I headed into Richmond. As we got off the bus, I was slightly distracted, and in my line of sight, I could see LM was next to me, and I turned my head for a brief moment, to put my bus pass back in my bag. As I did this, he ran, away from the bus stop, and it seemed as though he was heading for the road. He wasn’t, in fact, he was heading to press the button on the traffic light machine, as he usually does, but he was excited, and forgot to wait for me. My fault, I should have been watching him more clearly. An older gentleman, who was standing close by, leapt out, and grabbed LM and pulled him fully away from the edge of the road and the lights. I by then, had got to him too. LM was a bit unimpressed at being manhandled by a stranger, but I was very grateful. I had been one foot too far away, and he probably wouldn’t of headed into the road, but I am glad that the man was there, to prevent the possibility. I thanked him, and we walked across the road. As we got to the other bus stop, on the other side, to wait for our next bus, a lady spoke to me, and was really quite offended that the man had grabbed LM and pulled him back. She said “he was just pressing the button, he had no right to grab him”. I was a bit kerflummoxed by this. The man had thought LM was heading into the road, so he had acted accordingly. I would rather he had done this, than ignored him, and LM had decided to step out. (He is pretty good, we have drilled him in the rules of roads, crossings etc, but he IS only 3.5, he isn’t fully able to be safe, I do trust him, but I don’t if you know what I mean?) I would have done the same thing, in fact I have, acted to make a child safer, in similar circumstances.

Maybe she thought he was a dodgy old bloke, maybe she thinks children shouldn’t be grabbed or manhandled (I also don’t think they should be, they have as much rights to their body space as adults, however, in a dangerous situation, I would rather my child was grabbed and pulled to safety) or maybe she just didn’t think it was a dangerous situation. I do think the world has gone a bit crazy though, and sadly, we don’t seem to look out for our fellow human beings, much any more.

Just a random thought to ponder on. Would you have done the same as the man? Would you have just ignored or looked away, or would you be offended if someone “grabbed” your child, and pulled them out of what they thought was a potentially dangerous situation?