We are going to use a marble jar, as a reward/incentive for Little Man. 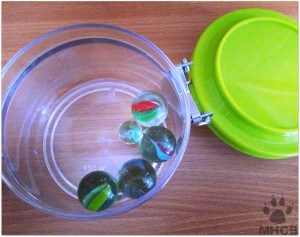 I wrote recently, that I was struggling with my children and their listening and doing skills (or lack thereof) and that I was frustrated. Part of that was tongue in cheek, and I know it’s normal for children to sometimes not listen, when asked to do things, and that at 4, Little Man is at a developmental stage where there are lots of new things to learn, emotions to deal with, and things around him that are much more interesting than what Mummy has to say, when it is time to get read for school, bed, going out, eating our meals (and this child is STUBBORN, I cannot think where he gets that from, at all 😉 ) but I am still feeling the strain, and starting to loose patience, when I have to ask for school shoes to be put on 10 times, for action to be taken when I ask him to get ready for bed, and also he is going through some normal behaviour challenges for his age, that we and he are learning to handle but it’s hard work (like most parenting) trying to figure out how to help him, how to be patient, but also enforce some rules and boundaries and also encourage positive behaviour.

So, we have our marble jar.

The plan is, he starts with 5, at the beginning of each week. When he is helpful, listens, cooperates and I don’t have to shout or repeat myself like a demented parrot, then he gets a marble in the jar. Undesirable behaviour, that doesn’t stop after one warning (fighting with his sister, hitting, shouting when he isn’t getting what he wants and also a lot of bedtime procrastination) will mean he looses one marble. At the end of the week, we count them and if he has more than ten, he can choose a treat (this week, he wants to go and get a particular book out of the library, which I have already reserved so he is not disappointed and choose a chocolate from our favourite chocolate shop) If he has less than ten, we will start over a new week.

I know, he is only 4. I know that some of this behaviour is normal, and it will pass, but I also know that if we don’t put some gentle, but firm boundaries down, and moderate and teach him, we will just have to deal with far worse. He needs to learn to listen, just as much as I need to learn to be patient. He needs to learn that sometimes, his behaviour has consequences, and I think working towards a reward will help.

I do sometimes think that incentive type things for children are a gimmick, and not helpful, so part of me is wondering if this will work, but having chatted to several mother’s of strong willed, feisty little boys the same age as Little Man, who say it has helped, and worked well, I thought it wouldn’t hurt to give it a try.

So, will I loose my marbles entirely or will Little Man prove he can rise to the challenge? I will update you next week, with how things are going….