Four, I am rediscovering, and also remembering, is a fun, fantastic and also frustrating age. 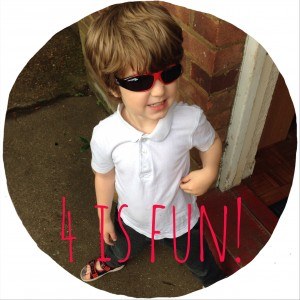 I remember, when Big Girl was turning two, being told “oh, you have the terrible two’s ahead of you, good luck with that, just you wait” because she was an easy toddler, but the expectation was that she would turn into a nightmare, at that magical age of two. Actually, she didn’t. We had our ups and downs and moments where parenting felt very challenging, but she sailed through two, into three, with very little mishap or stress.

When she hit the age of four, we did hit a bumpy patch. In fact, probably, coincidentally, at three and a half, she started to become more vocal, what I would call uncooperative when things didn’t go her way, and we had a few mammoth meltdowns and refusals to go to nursery and clingy behaviour. This behaviour coincided with baby brother arriving on the scene, so I am not sure how much of it I can blame on the normal struggles of a child adapting to a sibling, or a growth/developmental spurt at that age.

I wrote, last year, about Little Man, and testosterone and about how I thought we were hitting that spurt of hormones where a small boy is growing, changing and developing, and the struggles we were having helping him, and ourselves as parents handle it, and to be honest, we are still in it.

I think all boys go through a huge change, somewhere between aged three to four and maybe slightly beyond. Little Man went from having  a lot of issues, around his hearing, and the ear infections he was struggling with, coupled with some sensory issues related to that, to suddenly feeling so much better after his grommet surgery, and starting speech therapy, into a huge growth spurt both physically and emotionally.

Four is amazing. His speech, and cognitive abilities, and skills blow me away. He has a razor sharp mind, doesn’t miss anything, and won’t be persuaded, distracted or moved, when he decides something has to be the way he wants it. He is much less patient than his sister was at that age, and gets frustrated easily, yet can do puzzles and play games on the computer aimed at a child older than he is, with ease.

He gets angry very easily, yet also very affectionate, and almost wanting to be babied. He is VERY physical, so much so, that I have to speak to him about being gentle, and that he has to remember that other people, usually his sister, me, or his playmates, don’t want to be climbed on, rolled on, tickled quite so vigorously, or that when he is angry or frustrated, that he cannot push, shove or hit.

He is totally curious about the world, I can almost see his brain processing information, he is like a little sponge. He loves reading, learning, telling me things, and talking to people, once he has warmed up to them, about his beloved Octonauts and random marine biology facts, showing how well he can count, and recognise words he sees, and expresses his desire for a canine companion, on a regular basis. 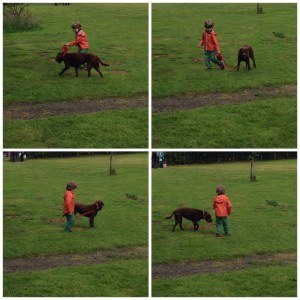 He is feisty, and stubborn, and we have had some huge tantrums, when he feels like life isn’t going his way, or when he is tired and frustrated, much worse than his sisters. I have to literally hold him, and calm him down, or he will throw things, and shout and get himself into a real rage. When he wants to do something his way, ie put his shoes on, in his own time, or get dressed, or tidy up, he is methodical and precise, which is amazing, but also quite frustrating for me, and I am struggling with juggling being patient and allowing him to do things himself, and the need to leave the house in reasonable time and order. Getting him to listen sometimes is hard work. I watch in amazement, when his nursery teacher is able to get a group of 25 3-4 year olds to sit, listen and respond to her, when I have to say “please put your shoes on” or “No, we don’t brush Jasper’s tail with my hair brush” at least ten times to get a response. (in fact, I have threatened to have the nursery teacher move in with us, she clearly has THE POWER!)

He is loving, adores his sister (when they are not squabbling over toys) and is struggling with the idea of having to leave his beloved nursery and adored teacher, at the end of the summer (me too, if I could have him there for another year, I would, I think we will both be sobbing at the end of this term!) and he is my little shadow, and far more clingy and needy than his sister was at this age. I often wake up in the morning with a little person tucked into my back, holding on tightly to my arm, when he has crept into bed, in the night, unannounced and he is quite happy to potter about with me, rather than go to group activities although he copes with these beautifully now, when we do go, which before his operation was a huge struggle.

It’s all very challenging, both for him and us, as parents. I am realising how little patience I actually possess, and that there are battles to be fought, and won, but also things I have to let slide in order to live in a fairly sane household. This stubborn little boy is challenging my thoughts on parenting, yet is a delight, and makes me laugh and feel proud so often, I have stopped counting. His nursery teachers say he is quiet and potters along, but doesn’t like being made to join in unless he feels he is interested in an activity,  that he is good with his hands, with excellent fine motor skills and is very bright. He is always on the move, runs everywhere, and needs to be out and about daily, to burn off the “Boy” energy brewing. The only time he is still is when he is asleep. He also gets frustrated with us, when he is trying to tell us things, but his speech is not quite there yet, or when he wants things to go a certain way, and he sees us, as being very mean, when we don’t go along with it, the way he wants (last week, a meltdown because Mummy said no to crisps, chocolate and juice for breakfast, I am so mean, I know!)

Basically, four is fun, but frustrating, we have a text book case of a little boy growing and developing, with a sprinkling of his sensory issues left over making things a little challenging at times. I am not sure who is learning more, at this stage, him or his parents. We love it, but gosh, sometimes we scratch our heads and wonder what on earth we are doing. I think, and am reassured by countless other parents of small boys that this is normal, and it too shall pass. One day he will be a teenager, and that will be a whole other hormonal story! 🙂

Do you have a four year old boy, or have been through that stage? I would love to hear from you, fun, frustrating, or fantastic, and what did you learn? What words of parenting wisdom can you impart, to help me, us and other parents through this wonderful but sometimes rather tiring stage?