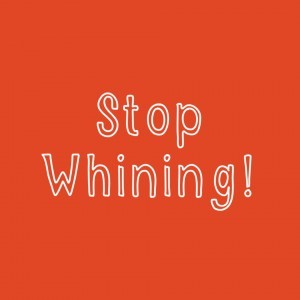 A familiar phrase, that, I am sure most parents, even those amongst us who claim to be perfect and have the most well behaved children,  have uttered either at our children, under our breaths, or even at our tired and long suffering spouse (yes, LSH has, on occasion, had to ask me to stop whining 😉 )

Children seem to have a special skill, with whining. It’s a kind of insistent, droning, annoying and horribly persistent thing, that they do. There is usually a reason behind it, well for my children, there usually is.

They’re either tired, or hungry, or a combination of both, or they are struggling to manage their own emotions and expectations, over what’s going on around them, or they have been disappointed because either I or LSH has said no or told them they can’t have something or asked them to wait for something.

Sometimes, however, children (like some adults) whine, for no discernible reason, and it’s even more frustrating.

Last week, I lost my cool slightly, after a session of whining from both children (they had been told they couldn’t watch the TV until they had tidied the toys they had been playing with and helped me put some of their laundry away (I know, what a CRUEL parent I am!) I got slightly cross and basically told both children to “stop whining” and then proceeded to give them a lecture on how the whining is frustrating, annoying and not going to get them anywhere.

My almost eight year old then rather pointedly says “But Mummy, you whine, and it’s also not nice, when you want us to do things, or you are talking to us, sometimes it sounds like you are whining too….”

So, that shut me up, of course, because she is right. Whilst I find it annoying when they whine, I tend to react, in a kind of passive, whiny type way, back. I also think my tone, when I am trying to get things done, or get them to respond, can be whiny. I am now partly understanding why sometimes they switch off and don’t seem to listen to me. I find their whining frustrating. Maybe I need to change my tone, when I am communicating with them, too. I think, it happens mostly when I am tired, or under pressure to be somewhere, or doing something in a hurry.

So, we have a new rule round here; NO whining.  We need to talk to each other, we need to look at what makes us feel whiny, and I need to set the tone. If they hear me whining and whining, of course , they think it is OK.

I know, children whine, and I am not expecting perfection. They will, of course, still whine, because they haven’t learned how to handle their emotions but maybe, just maybe, we can have a little less of it.

Nothing like having your parenting faults pointed out by your children, to make you rethink how you parent, or at least try to parent better.

How do you handle whining? Most of the time, I ignore the whiner (or is it whinee?) unless I can pinpoint a logical reason (ie hunger/tiredness) and negotiate around that, but just being whiny? I will ask them to speak in their normal voice, to tell me what they want, and if I cannot comply with that (“no, you are not having a biscuit ten minutes before supper”, for example) I tend to just try and ignore the whining, after I have given a logical response to answer why the whining is happening.

How to handle it? How to lessen it? Any tips or solutions? I am pretty sure parents throughout the ages have wondered the same….?