We have a lot of counting to ten happening in our house, at the moment. Little Man, going through the normal developmental stages of being 4, growing into 5, gets very frustrated and we (and I mean me, because I am usually around him the most) have been audience to some spectacular tantrums and episodes of real anger and upset on his part. 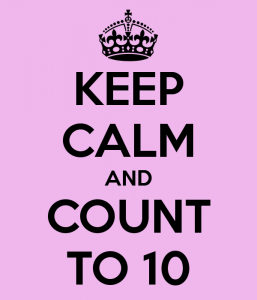 It’s pretty challenging, for him, as he gets so worked up, and is hard to calm down, and also for me, as to be honest, the temptation is there for me to yell back at him when I am frustrated too. Sometimes the outbreaks of rage are for logical reasons (he’s over tired, or hungry and just cannot handle life, or he is struggling with sensory overload – like at our toddler group this morning, he isn’t at school yet, so has been coming with me this week, and does struggle with the noise and amount of people around him) or because I am the meanest Mummy in the world and won’t let him eat chocolate for breakfast, or insist that he gets dressed before we leave the house, or call time out on the iPad, or tell him it’s bedtime….

Most of the time, I need to get a hold of myself, before I deal with his tantrums. Him being angry and upset is one thing, but add me to the mix, and it can get very heated. I need to get a grip on my own emotions, look at the situation, count to 10 and then deal with him.

I usually let him have 2-3 minutes to express himself, then I will try and take him in my arms, and cuddle him, and say “count to ten”, I count, and then I will talk to him, about what has made him angry. If he is still upset, I might walk away for a few more minutes, then try again. Usually after the second attempt, we make progress and start to calm down. He doesn’t get his way, he doesn’t get what he wanted because he has thrown a tantrum or got very angry, but I do make an effort to calm him down, make him understand why he isn’t getting what he wants, or compromising, and most of the time it works. Me walking away, giving him time, counting to ten myself, helps me to be calm and objective. It’s hard to be both, when you have a raging little boy, and you feel under pressure.

This is only at home, or when we are somewhere where it is appropriate to do so. I am still trying to figure out the “handling a four year old meltdown in public” thing… It’s not easy.

This too shall pass. We are in the meantime, counting to ten….

Posted in Family Life and Parenting and tagged Count to ten, parenting, tantrums.