So, earlier this week, I had a bit of a rant on Facebook, about the fact that Little Man was struggling with being so tired after school, and that I personally think that at not quite 4.5 years old, he is too young to be in school, in a classroom, for 7 hours a day, every day. I was surprised and touched at the support I received, both on-line and in person. Thank you to those of you who propped this very emotional Mummy up, after she had to leave her sobbing son, at the classroom door, with a teacher and then had a massive wobble, herself about the decisions she has made, and what she needs to change, to help him manage. 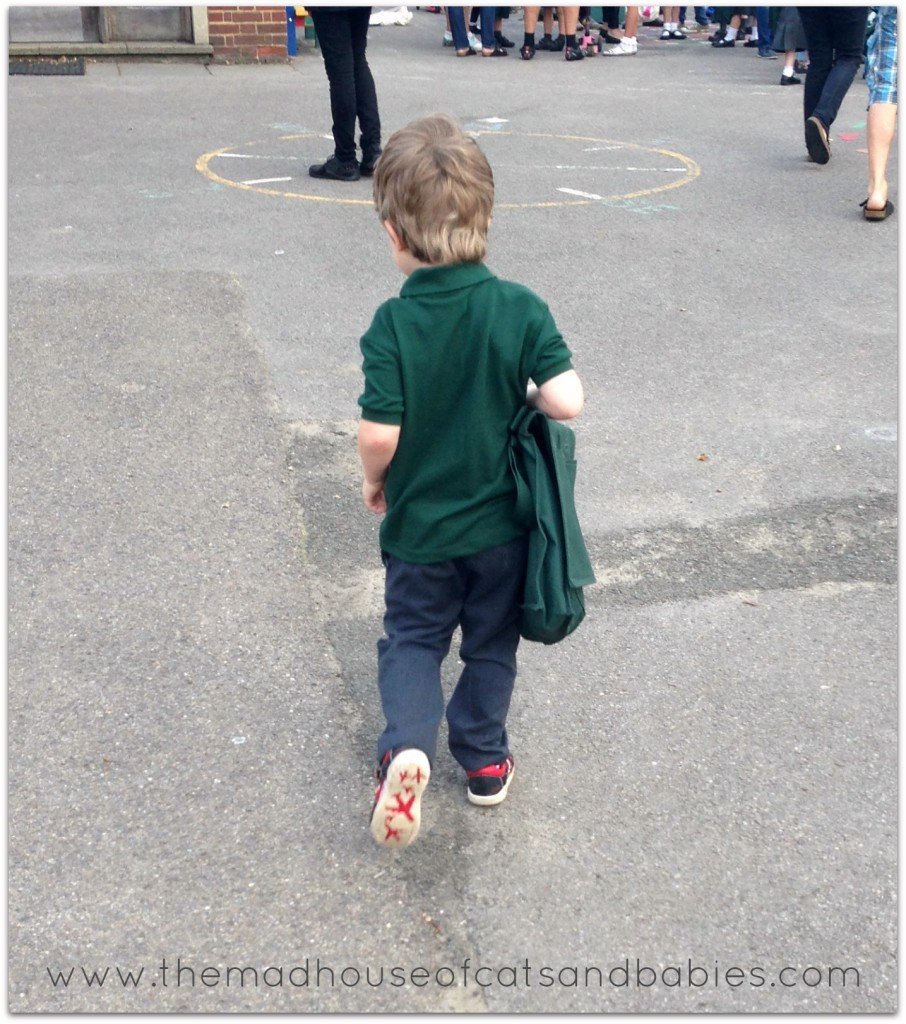 He survived the day, and is doing “ok” so far this week, with full time, but his behaviour is harder to handle, and he is TIRED, and also not sleeping as well as he was (yes, he was sleeping well, that’s another blog post for another day) and he has some sensory issues that mean he is struggling with noise, adapting to routine, and coping with a longer day. We have made the decision, with the teachers, that he will attempt this first half of term full time, and if by half term, he is clearly not coping (and I know my own child, and I don’t need to be told that it’s normal, and that he HAS to just deal with it and get used to it) then we will pull him to part time, and collect him after lunch, for the rest of the term, and then make a decision from there as to how much school he “needs”. I won’t go into much more, on my thoughts on this, I may blog about it, separately, but I am still very emotional, and trying to make wise decision, based on what’s best for MY child, not on what everyone else says “should” work, or what is expected but not legally required by the government and education system. If part time school is what will be better for him, then that is what we will do. I have even contemplated pulling him out and home-schooling for reception year, but that is also another blog post, and we are not ready to go down that path, yet, although, I won’t hesitate, if that is what is  needed and is best.

I will say that his teachers have been lovely, and kind, and are looking out for him, and working with him, and he generally loves school and they are listening to me, and taking in what I have to say, and I know they have a tough job and have to work with a whole class not just my son, so I am trying to work with them too.

But, on a happier note, he is coming home covered in paint, and telling me about his friends and what he has been up to (last week all I got was “I don’t want to talk about it, can I have a biscuit, please?” when I asked about his day.

He is also loving starting to learn to read and is already working on sounds and letter forming, and putting together simple words. We did some work on this over the summer, and the nursery also worked with him on this, last term, and he is very enthusiastic about it. I am hoping this lasts, and am working with him, to encourage him, and help him, and make it as enjoyable as possible, as well as being a bit proud, that he is doing so well.

I also have volunteered my time, one session a week to help in his class, as I did with his sister, to help with cooking. I LOVE cooking with kids, and am really looking forward to trying out some recipes and having fun with the class. He was very excited when I told him this. I like to be able to help in my children’s school where I can, and build a bit of a relationship with the teachers. It’s always helpful for them, to have an extra pair of hands, and it’s good for me, to be part of the class in a small way, and see how much they do, and how they work with the children.

So, we are finding a lot of positives, in amidst some anxieties and “what if’s” of starting school and going full time. I know I (and when I say why, I mean we, LSH, of course is fully involved, with all of the decision making, it’s just easier if I say I, rather than sounding like the Queen, with “we” when I write) can make the right decisions for my child, and that whatever we do, we will be doing the best for him, and what he needs. It’s not all bad. We are almost through our first week full time, and time will tell, as to how he copes and in the meantime we are focusing on the positive things, and coping when we need to.

Please do not copy my work, or use my photos. Thanks © 2014 karen reekieAll Rights Reserved
Posted in Family Life and Parenting and tagged homeschooling, parenting, school.

Learning from my skincare mistakes and teaching my teen not to repeat them...

Coffee and vitamin C don’t just have to come in pill and cup form. You can also use them on your skin too, to perk up and brighten morning skin. This routine works for me when I need a “mum is tired” skincare routine. https://catskidschaos.com/2020/04/11/vitamin-c-and-caffeine-skincare-regime-for-brighter-skin/

@charlesreekie and I have an in house date night tonight. Dinner and a movie. Do we watch Hamilton or the story of Eurovision Song Contest and how it came about?

Why I don’t hide my spots anymore. It’s only taken 20 years to be comfortable in my skin...