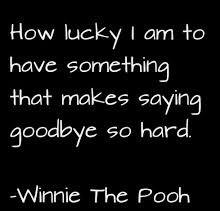 I had grand plans to write out a long and philosophical post about friends who live in far off places and how it’s hard to say goodbye, when they move away, and that life is about learning how to deal with these things and how amazing social media is because we can keep in touch, but I can’t.

I’m sore. I probably should be used to it by now, but I’m not. I’ve lived all over the world, we moved countries and schools when I was a child, several times. I have friends and family in many places, so does LSH. We’ve said goodbye before, to good friends who have moved around the world, and it hasn’t got any easier. We live in such a fluid society now, travelling is much easier (although not cheaper?!) and people move for work, for family, or just to try somewhere new for a season. It’s something we know happens. One day, we ourselves think that we will be saying goodbye to many friends and family and packing our bags to leave everything and everybody we know for somewhere new, and that is equally hard. I know the friend that I said goodbye to today is sore too, saying goodbye, packing up and leaving. It’s not easy, whether you’re the one leaving or the one left behind.

I normally go into a kind of cheerful denial, to stop myself feeling sad and sorry that another friend has moved on, and try to keep in contact across the miles, but today, I’m sad. Our other friends are sad, and we’ve said goodbye to someone we will miss greatly. They’re off to a very exciting new life and adventure, much nicer weather (ok, I’m slightly jealous too!) and they leave behind a big hole, that won’t be filled easily. We might be grown ups, but we still feel emotions, and yes, I’ve cried today!

Posted in Everything else and tagged emotions, Friends.