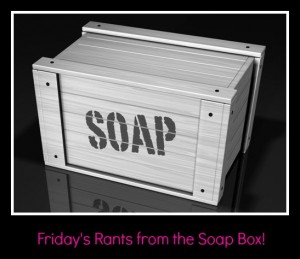 Yes, I know it’s Monday, but this rant was supposed to go out on Friday, but it was a bad week for computers and internet in our house so I got behind. You can start your week off with a rant!

This week, I am have a chunter about the school inspection system, that we all know and love… Yes, Ofsted! I don’t think there are many  people who love them, I know most of my teacher friends go pale at the very mention of their name.

The whole system of school inspection needs overhaul, and most people agree that. Well, the chap running the system doesn;t think that, but frankly, he needs a kick in the pants to retire, anyway. (I did say this was a ranty post, you were warned!)

Yes, our education system needs to be held accountable, standards need to be met, systems should be in place to monitor schools, and make sure teachers are doing their jobs and all that, no one would argue with that, but the ridiculous, archaic system we have at the moment, just puts a ridiculous amount of pressure, on an already stretched system and stressed out teachers. There is no taking into account of demographics, social needs of children in individual schools, how hard teachers have to work with some children whilst not being able to give time to other children, and how many targets that have to be met. What gets my goat, is that the inspectors who go into schools and make judgements about how schools are doing may not have worked in schools or been in the education system since they were at school themselves! This makes no sense so me at all? Why isn’t the body of people that sets the standards for our schools made up of people who actually know what goes on in schools and can work with teachers and the system? A school inspection is a very stressful time, for teachers, head teachers, and even the children, and to be honest, I am not sure gives an accurate picture of how a school and it’s pupils are doing, much less when the people carrying out these inspections really don’t seem to care about what’s going on, other than targets that HAVE to be met, regardless. I don’t understand why we put people with no experience of a system, in charge of saying how that system should work.

To make it even worse this week, instead of a much needed overhaul, the new wisdom that some schools will face two inspections on one day. This is a new pilot, they are trying out, to make sure they they are doing their job properly. Not to check on the school, but to make sure that the initial findings of the first inspection are the same and that they have come to the same conclusions. WHAT?? So not only do teachers and schools have to face one inspection, they then have to be re inspected to make sure the inspectors agree? Instead of overhauling the system, they are just adding pressure, more paperwork and I assume paying more inspectors to do the same job? Every teacher I have spoken to this week just thinks this is insane, a waste of time and MORE bureaucracy!

Yet another waste of time, money and effort. I sometimes despair of this country and I worry for our education system.

What do you think? The system needs an overhaul? Are you a teacher who wants to share your thoughts? Love school inspections or hate them? Think the system works or not, do feel free to comment!