We own two cats, a handful of fish, and two African Giant Land Snails, in this household. Or perhaps they own us, I am never quite sure who is actually in charge round here…

The animal residents are mostly low maintenance. Well, Layla isn’t always, but we love her, so we don’t mind too much.

We had our usual annual well check up for the cats, last week, which involved man handling (actually it was woman handling, because I seem to be the one who has the ability to persuade two slightly annoyed, very suspicious cats into their carriers) two cats into cat carriers, then cart them off to the vet (with much howling and growling from both carriers, they KNOW they aren’t going to love what is coming) to be checked over thoroughly, have their annual vaccinations, and for Layla, a blood test to see what her FiP antibody levels are, now she is on a trial medication for research.

All is well. Jasper, apparently has gained a little weight, but as he basically is a walking feline dustbin with a penchant for eating pretty much anything he can get his paws on, we aren’t surprised. I have to “watch his diet” which will be somewhat challenging (I have had to ask our neighbours next door if they wouldn’t mind not letting him into their house, because he likes to eat their dog food) and he may have to go a purely dry food diet, if he gains any more. Weight Watcher’s for kitties anyone? To be fair, he is a big cat, his dad (I met his parents) is huge, with a long body, enormous head and paws, and I think a lot of Jasper’s size is genetics not greed, but we are keeping an eye on him. We also have a prescription for antacids for him, for the occasional stomach ache he gets, from his feline dustbin ways.

Layla is in good shape, and behaved well, despite loathing the vets with a passion. She grumbles and growls all the way through being examined, and vaccinated, but as long as I hold her, she keeps her cool.

Now, as the nominated cat person in the house, I get all the good jobs. When we got home, we had to administer some very large worm tablets (think 15 minutes of trying to get a rather big, slippy pill into a rather annoyed, wriggly cat, who despite my best techniques kept spitting the pill out, we had to resort to swaddling them in a towel, to finally get any cooperation from either cat) and then apply flea treatment (which Layla loathes, she actually will sulk for days) 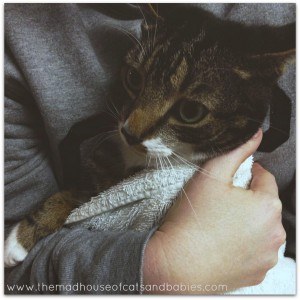 Human 1:Cat 0 but only just, and I am pretty sure there was more worm medicine on me, than in him, by the end. That’s the last time I boast to the vet “I am a dab hand at getting pills into cats”

I also get the delightful job of setting up a litter tray, collecting a “sample” with some special crystals, of urine from Layla, which then has to be transported to the vets to check her kidney function (just routine, as she is now getting a bit older). The vet said “just pop in in her tray, and wait til she pees”. So far, we are on attempt 3, and she is having none of it, and won’t go near the tray. I have told her she must produce, but she just looks at me like I am stupid (she is probably right) and wanders off to take a pee in the garden, probably whilst laughing at me, waiting by the tray inside… 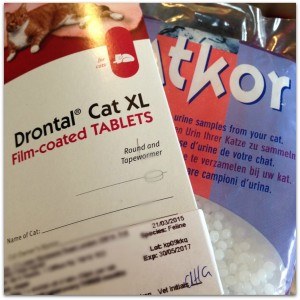 Yes, I get all the good jobs round here, for very little reward, bar the occasional cuddle when a cat is cold and needs a warm lap… I don’t mind really though. I still haven’t managed to get a urine sample. I doubt I ever will….