I think if I was asked for a phrase I use a lot at the moment when talking to both my children, it would be “stop squabbling!” usually with a “please” or prefaced by “seriously guys”. I know it’s a common complaint for a lot of parents, but frankly the bickering going on at the moment is DRIVING ME MAD. 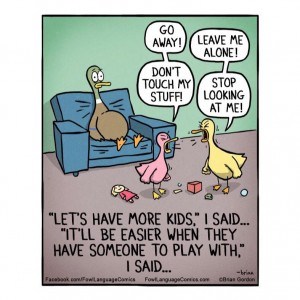 My children adore each other. They will fight tooth and nail to defend each other if someone else attacks or tries to hurt them, they often will play happily and beautifully together, and I sigh with contementment wathing them enjoy each other’s company, and working together, and they will love on each other, when the other isn’t well, or is unhappy.

However, some days, the bickering and squabbling is almost too much.

“She looked at me”, “he touched my arm”, “she’s taking too long in the toilet” “you are a poo head sister”, “she took my toy” “he broke my toy”, “she won’t let me choose what to watch on TV” “I don’t want to share”… It goes on, and if you are parent, you probably know these phrases and can add more.

It’s harder now, frankly, than when they were littler. When she was 5 and he was starting to toddle, there were odd moments where she would get upset if he touched a toy of hers, or he would wail if she walked away and stopped playing with him, but now, both of them very much have minds and voices of their own, and some days I feel like working for the United Nations trying to establish world peace would be easier than dealing with a slightly emotional 8.5 year old who is offended that her little brother, equally feisty and always a little more emotional, called her a “poo head” because of some small offence or infraction against his sensibilities, or in reverse, when she winds him up, because she knows exactly how to push all his buttons and he comes sobbing to me, claiming she is the meanest big sister in the world, when five minutes ago they were playing happily together. (usually the squabbles happen just as I am about to go to the toilet or am actually on the the toilet, or on the phone, or in the shower, or doing something equally important. I am sure children pick these times deliberately?)

I have chatted to many other parents, who all claim the same woes, and we all like to discuss how we deal with this. Do we ignore them? Do we get all tough and punish them. Lock them in a room together to duke it out? Remove toys until their rooms are bare and they have to get on to earn them back. Make them do chores. Cry, stamp our feet? Reach for the gin? Or all of those?

I am at a loss, and am facing a LONG summer holiday, which I want to enjoy, and come out of at the other end, with my sanity in tact, so I am throwing it out to you dear readers. How do you deal with squabbling children? Do you have any amazing strategies that work? Did your own parents deal with sibling squabbling in a successful way? Or do we need stiff gins all round and hope, like many parenting things, that this too will pass and we might survive it, just?

Please feel free to comment and share, I really do want to know what people think and how squabbling siblings are handled…?