For the next few weeks, I am going to be spending a lot more of my time, stuck in traffic. I knew it was going to happen. Two weeks ago, our local council sent a letter via the school saying that planned gas pipe replacement work was taking place, near where we live and that traffic would be affected. 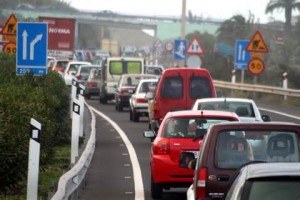 You would think that isn’t a problem, and in reality in the grand scheme of things, it’s a bit first world of me to be having a whinge about it. The work has to be done, sooner or later, due to the pipes being old and needing replacing, and sometimes life can be a bit more challenging.

However, it has been a nightmare, so far, not just for me but for the hundreds of people who use the road, near us. It is the only route from where we live to Richmond/Kingston. It is the only road that has a bus service, and it can get pretty busy with 6 schools within 2 miles of each other, along the route, and a fair amount of commuter traffic.

The nightmare has been made worse by the lack of organisation and communication from the companies involved. Our local council and National Grid have basically proved they couldn’t, frankly organise a party in a brewery. (I would use ruder words but this is after all a family blog, so I won’t) and when I and other people have communicated with them, via social media and telephone, we have been fobbed off, patronised, lied to and basically told that nobody cares about the fact that we are struggling to get to work, school and other places in any form of good time, due to the poor planning put in place. A small delay is one thing, being 1.5 hours late for work due to clogged traffic because temporary traffic lights have not been set up and manned properly is a whole other ball game.

The original letter stated the work was planned and would go ahead starting this week for 3 weeks. Apparently that was a lie, and it will now take 4 weeks. Getting basic facts right so we know how long this mess will last would be a start. Then when I contacted the council to ask what was going on, and why the work needed to be done now, and not in 5 weeks when the school holidays have started and the roads would be less congested, thus easing pressure on traffic I was told

“it’s urgent gas repairs”… Ok, so in the letter, it said it was planned replacement of old pipes. Probably very much needed, but if they have lasted this long, I strongly suspect another 5 weeks is not going to be the end of the world…?

“the roads are busier in the summer holidays”, um, this person clearly doesn’t live round here, or hadn’t had their coffee yet, because if they did or had, they would know how quiet the roads and buses are locally to me, in the summer.

“You need to find an alternative route” yes, of course, I will organise a taxi to take me through Richmond Park, at great expense, every day for the next 4 weeks then , shall I? Or perhaps I will just tell my boss that I am not coming into work for a month. The bit about “the road being the only one from where I work to where I live with the only buses that serve that area” seems to have passed them by. I don’t drive, but driving would be a nightmare too, getting out of our road this morning was taking cars 20 minutes due to the back log of traffic.

“You need to anticipate delays and plan accordingly”  Yes, true, but given that my children and hundreds of others, can only go to school at a certain time, and that the work I do is within hours I cannot easily change, it’s a little impractical for me to try and re arrange my life, and for others to do so, so we can sit in traffic for hours.

“people are working extra hours to get this job completed in good time”. Funny, every time I have travelled the route, I have seen NOT A SINGLE SOUL actually doing anything, at various times in the day. The traffic lights are there, but no one is manning them (although we were told someone would be monitoring them at peak times) and apparently the reason we can’t see anyone actually doing any work is because they are taking photos and surveying the roads. Why the road has to come to a grinding halt, whilst this bit is done, no one seems to be able to explain.

It turns out, that in fact, the reason why this suddenly urgent, chaos causing, badly managed works, is being done, now, causing great inconvenience to everyone is because they don’t want to do it in the summer holidays, as it would cause issues around the Rugby matches being played in Twickenham.

Why they couldn’t just come out and say this, in the first place, and admit that they basically don’t give a stuff about local residents, and I had to literally prize this out of National Grid and the council, is beyond me. Who cares if I am late for work for a month, as long as the Rugby traffic on the other side of the river in the summer holidays isn’t affected… Why am I paying my council tax exactly??

It would also seem that Richmond council, Nation Grid and TFL have either not communicated with each other as to what exactly is happening, with these planned/urgent/emergency/mustn’t inconvenience the Rugby world cup works. The baffling and confusing responses we have recieved are actually laughable and the blame being passed round and then finally being landed on us, the actual people trying to use the road, finally sent me off the deep end, and I now write this blog post. Apparently it’s all our fault for deigning to want to actually get where we need to be in sensible time frames. How dare we??

It’s a shambles, it’s badly organised, and it’s beyond a joke. National Grid and the council need to get their act together, communicate truthfully and clearly and then make every effort to get this bloody job done pronto. I will be sending them the bill for my taxi rides for the next month, on my alternate route…. let’s hope they get it done faster than anticipated, it’s going to be a hefty one…

Please do not copy my work, or use my photos. Thanks © 2015 karen reekieAll Rights Reserved
Posted in Everything else and tagged Gas repair, National Grid, Traffic.