So last week, I had a bit of an epiphany, and did something that surprised me and probably a few other people. I did something that people like to share about and admittedly it’s annoying when they announce it. I had a Facebook cull. 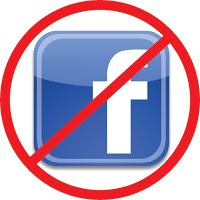 I love Facebook, but I also hate it. I love the interaction. I am a bit of a social media junkie, partly being a natural introvert, I find social media interaction much easier to handle and control, than real life situations, and I have found a lot of suport and help from not only Facebook but other places too.

The problem I have with Facebook, or the problems to be exact are:

It’s addictive. It’s easier to login and see what people have been up to, and sharing, than to face real life sometimes. It’s compulsive. I almost feel like I HAVE to keep up with life on Facebook, or I will miss out on so much. I also like to see what people are sharing, even when what they share makes me want to hurl my coffee at the screen or my iPhone accross the room.

It’s MUCH EASIER to interact with people on Facebook. Let’s face it, life is hectic, or at least ours/mine is. I have got to the point where I feel like I am doing better at keeping up with news on friends, via the little blue icon on on my phone, than in real life. If I have pinged someone a “happy birthday” via Facebook, then I am excused from acually giving them a call or sending them a card. Life is so busy, that’s my excuse. I don’t make any effort any more, because Facebook does it all for me.

I actually prefer to socialise and chat on Facebook, than in real life. As someone working on dealing with anxiety and being a social introvert, Facebook can be handy, but it has also become my crutch. I need to learn to manage a bit better without it.

Because I had a large number of “friends” and liked a lot of groups, my Facebook feed was MASSIVE and continoius, and because I use Facbook for work and blogging as well as personal, I am on there a fair bit, and frankly, my feed was becoming horribly overwhelming. Way, way too much information, all of the time. Yes, I could hide feeds, and unfollow, but frankly, why be friends with someone, if you never see what they post or share.

I worked out that out of the 550 people I was conncected with on Facebook, at least half of them never interact with me, or I them. People  I went to school with, old work colleagues, random friends of friends. Why be connected?

Facebook was feeding my ego. I spend a lot of time waiting to see who likes my posts and comments. I know that is the point, but when it gets too much, and you spend too much time composing things to please your Facebook audience, then it’s time to rethink things.

I am very wary of what I share on Facebook. You are bound to offend or annoy someone, somewhere, and even the most innocuos post, comment, or sharing something that amused you, could be upsetting for someone else. I am an opinionated person, I like to share,  but trying to work out who and what might be upsetting or considered rude by someone, but okay with someone else, gets exhausting.

In the reverse, I can’t handle all the opinoins, and posts on how I should be living my life, who I should vote for, what I should be eating, or not, how I should parent, who I should agree with, and so on… I love seeing people’s views, and hearing opinions, but sometimes it just gets too much and it isn’t relevant to my life, but trying to filter it out becomes too hard.

It was the post, probably well meant, by someone, that flashed up in my feed, with a link to an article about why being on Facebook, and social media was bad for you, and why our Facebook habits can be un healthy, that finished me off and made me resolve to change my habits.

So, I had a bit of a clear out. I am now working on a much smaller feed, and it feels so much better. I am resolved to keep my feed to a handful of friends I don’t see or meet up with, in real life, often, and family and family friends, to keep up with news and so they can keep up with us. I want to actually maintain relationships in real life, rather than through a screen. If I see someone three times a week, but know more about how they are via social media, than by actually talking to them, then I am doing something wrong.

SO, if you were deleted from my Facebook this week, please know, truly, it’s not you, it is ME. I want to get to a better place, in my real life relationships and cut back on how much time I hang out in the unreality that is Facebook. As good as it is, it isn’t real life. I have been avoiding a lot of real life, as I walk myself back to recovery from my axniety issues. I think this new me, less on Facebook, less trying to wade through what comes at me, will be a better person. Call me, or I will call you, let’s have coffee in real life, not just comment on each others photos of cups of coffee on Facebook… 😉

Posted in Everything else and tagged Facebook, mental-health, social media.