Welcome to my weekly Bad Parent blog post. A place to get those moments we all have, off our chest. Feel free to share in the comments section, if you feel the same or just have your own bad parent moment to share. No judgment, just honesty and hopefully some humour, because frankly I couldn’t survive parenting without that! 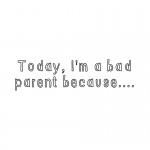 This week I am a bad parent. I did something rather stupid, thinking it would be a great idea, it made my son happy, and frankly, I was a numpty and didn’t think clearly at the time and now I am regretting it and LSH is muttering under his breath at me, and questioning my sanity more than ever…

What, did I do? You ask. Well, at the time, it seemed like a good and fairly innocent idea and as I said, it was a treat for Little Man.

He has had his eye, on a beach ball, in the local toy shop, for a good few weeks now, and has been asking me “can I use my pocket money to get it?”. I have tried to fob him off with trips to Smiggle instead, but he’s a determined little soul (read stubborn, I can’t think where he gets that from??) and still kept asking. It wasn’t so much the cost of it, just that a beach ball, when we aren’t at the beach, seemed a bit like a weird request.

Anyway, last week, we had a successful trip to get his hair cut (the first time we have been and he hasn’t screamed throughout) a great trip to the dentist (pats self on back, my cutting back on juice efforts were praised my our rather dishy, nice new dentist) and he also has had a glowing school report and has done brilliantly in his first year at school despite having some struggles with his on going sensory issues, so I finally caved and decided that I would let him get the much desired beach ball to treat him.

What harm, you ask, can a beach ball do?

Well, for a start, I bought “extra large” ones. Not only are they, ahem, “extra large” but they almost killed me to blow them up, my lung capacity clearly isn’t up to the job, and self induced beach ball inflation hypoxia is not something I would recommend to anyone.

The other problem we have is that the rule of “the beach ball doesn’t get played with in the house” was not being adhered to, in any shape or form. Partly bad parenting, because frankly, when he played happily in the bath with it for twenty minutes, which meant I could fold a huge heap of laundry and make two phone calls without interruption, breaking rules was to my advantage, but partly because my children’s listening skills are, shall we say, slightly lacking right now (let’s not get started that according to both their teachers they are very good at listening and doing what they are told at school, apparently) and “no beach balls in the house” actually apparently means “let’s chase the cats with the beach  ball” or “play football in the living room” whilst Mummy mutters in the kitchen, finally throws the balls and children into the garden, only to then have to go and retrieve said beach balls from the neighbour’s (who don’t have any children but are becoming quite good friends as we seem to spend more time in their garden retrieving things, than we do in our own) garden, AGAIN, because of course, beach balls are very light and float quite easily where they shouldn’t when the wind blows.

The last straw was this morning, when after a weekend of wishing I hadn’t bought the beach balls, with LSH really being quite cross with me, (and I don’t blame him, frankly) a vase was knocked over and broken, by unnamed children playing beach ball tag whilst I was getting ready for school. I couldn’t actually be that cross with them, because I bought the balls, and haven’t been as strict as I should about them, but I finally pulled myself together, realised my parenting fail, and both beach balls have now been deflated, hidden where the children can’t find them, and will be brought out when we go away on holiday and we can take them to the pool or lake, where it will be APPROPRIATE to play with a beach ball. We had a few tears, and I had to apologise to my children for being silly and letting them have the balls when really, they are only meant for the beach, and when LSH gets home later I will also grovel to him.

So, learn from my parenting mistake. Beach balls are not suitable toys for inside a house or garden. I won’t do that again.

Have you had a parenting fail or bad parenting week? Feel free to share in the comments or link your on blog post, no judgment here…. 😉