Jasper and Layla here. We have catnapped the blog for a few minutes to have a rant.

Humans are silly, in fact they are downright weird, and frankly, a bit annoying sometimes. We honestly don’t think that they really actually understand us cats, even though they like to think they do.

For example, this week our human decided that because she had seen a silly video on the internet, where some cats were afraid of cucumbers, so she went out and bought a cucumber and decided to see what we would do when she presented it to us. Of course, we are not afraid of cucumbers. Why on earth we would be afraid of salad ingredients? She was most disappointed.

Then she decided to see if we would play a game on the thing she calls the iPAd. It seems that there are some other cats who like playing a chase game on it, and she thought we might like to try it. Of course, we are not stupid and we aren’t fooled by pretend insects, and we don’t want to play “chase the fake spider”. We have better things to be doing (like stalking the hamster, or catching and chewing up REAL spiders, or just taking a nap, frankly) 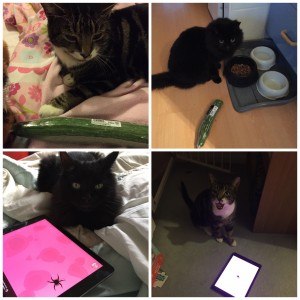 “We are not amewsed”

The last straw this week, was when she told us that she wants us to get dressed up for Christmas Day, and she had found some “cute” things for us.

We THINK NOT. If she thinks we are getting dressed up and being made to look ridiculous, in THESE outfits, she has some serious furballs in her bed coming… 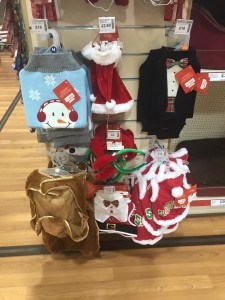 Humans are silly really. Why we put up with them, sometimes, we wonder. Really, it’s only because they feed us and have warm spots for us to sleep. One day, cats will rule the world. and then they will realise how clever we really are. No silly santa hats here…  We are off to shed fur all over the carpet, deposit a furball or two in places the humans hate to find them, and whine for dinner, until they give in and feed us early…