One could say that diaper rash is just a part of growing up. When babies wear diapers, wetness is trapped against their skin. This wetness can lead to irritation, red bumps, pimples, or swelling.  Most diaper rash is normal, and to be expected. If you take simple precautions to keep your baby’s skin dry, such as leaving his diaper off for fifteen minutes after changing him, applying a layer of barrier cream after each changing, and changing his diaper frequently you should be able to stop most cases normal diaper rash. Sometimes, however, the diaper rash won’t go away. Then you need to try severe diaper rash treatment to get back the smile on your baby’s face.

Severe diaper rash is classed as a rash that doesn’t go away after a week of trying simple drying methods.  At this point, you may want to make an appointment with your pediatrician, but he will probably recommend one of the following methods to treat your baby’s severe diaper rash. 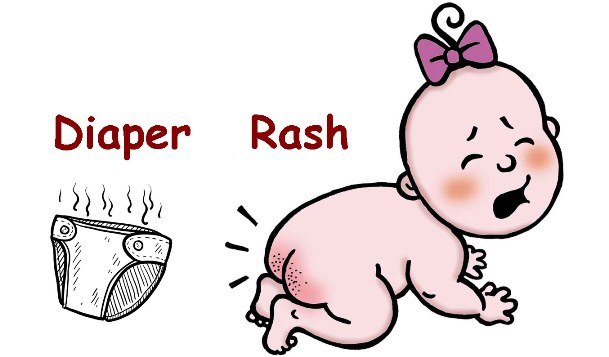 First, it may be that your baby’s sensitive skin is having an allergic reaction to his wipes, diapers, or diaper cream. Try switching brands one at a time to see if there is any improvement. Your baby might also be having an allergic reaction to something in his diet. If he is already on solid foods, eliminate acidic foods like tomatoes and citrus. If he is still breast feeding, eliminate those things from your diet. Food allergy diaper rash is generally more concentrated around the anus rather than spread out across the entire diaper area.

If it isn’t an allergy, a severe diaper rash can sometimes be caused by a yeast infection.  A yeast infection will look bumpy and scaly in addition to be being bright red. This can occur if bacteria from the urine or feces in the diaper infect a normal diaper rash.

You could see your doctor, and he would most likely prescribe an anti-fungal cream.  However, you can also purchase an over the counter variety called Clotrimazole that most people say works just as well. After changing your paper and patting him dry, apply the anti-fungal cream, then white petroleum jelly over the top before putting on a clean diaper. You might also try feeding your baby a little plain yogurt mixed with his food or milk, as that can help eliminate any yeast that has built up in his intestines.

Treatment for severe diaper rashes caused by food or yeast can effectively be treated at home. However, if your baby’s diaper rash starts to ooze or moves out of the diaper area and onto the abdomen, you should make an appointment to see your pediatrician as soon as possible.

This means that you are probably dealing with a bacterial infection that is too strong to be treated with over the counter medication alone.  Don’t panic, there are plenty of prescription creams that should clear up the infection in no time. Engaging in severe diaper rash treatment is a common occurrence for most parents.