Last week, we sadly lost our second hamster. Our other hamster died a couple of months ago, so we were all a bit upset when we realised Robin had gone to sleep and wouldn’t wake up. He had some health issues we were taking care of that we knew he wouldn’t get better from but he had seemed ok. He had had a good life for a hamster, and clearly his little body had had enough.

The hamsters are my territory. I clean them, mostly handle them, and they are my pets. I get very fond of them, and love having a chat to them, and they keep me company when I am at home. I was pretty heartbroken to loose Robin, after Batman only a few months ago.

I didn’t want to get another, but the cage, sitting there, made me so sad, that the husband persuaded me to see if our local pet shop had another one we could give a home to.

Today we went to see, and we came home with Worf. 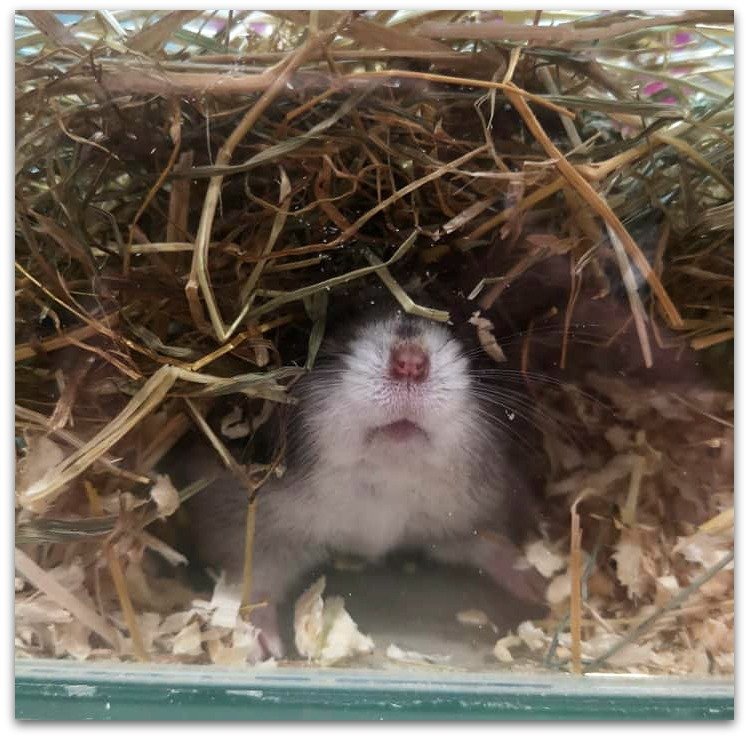 He has been sitting in the pet shop for two months, rejected because he has a few issues.

He was mishandled and not handled properly by his previous owner and also picked on very badly by his cage mate so was sent back to the pet shop and no one has wanted to take him on.

Of course, I had to take him.

He’s a sweet looking Russian Dwarf hamster, and I firmly believe with the right attention, gentle and slow handling, and some love, that he will be less angry and annoyed at life. We have had hamsters for a long time, and know how to look after them, and we like a challenge. He’s come home with us, and the next few days, he will be left alone to adjust to his new home, and get used to us. He is in the kitchen, where he can be part of what’s going on but during the day we are mostly out so he will get peace and quiet. He’s also where the cats can’t get to him.

We assume his previous owner liked Star Trek, and given that the character he is named after can be fairly angry and grumpy, the name for now seems appropriate, but we may change it, if we don’t think it suits him.

Life is never boring around here.