Welcome to Spotty’s Sunday. Our little corner of the blog for all things Leopard Gecko. Written by Matthew, with a little help from mum. Spotty is our Leopard gecko who is about 26 weeks old.

This morning I woke up and realised that Spotty was about to moult (shed his skin because he is growing) and I got my mum to come and see him, because he got rid of all his skin and we saw him eating it too (he does that to give himself some extra energy, it’s hard work getting rid of your old skin) 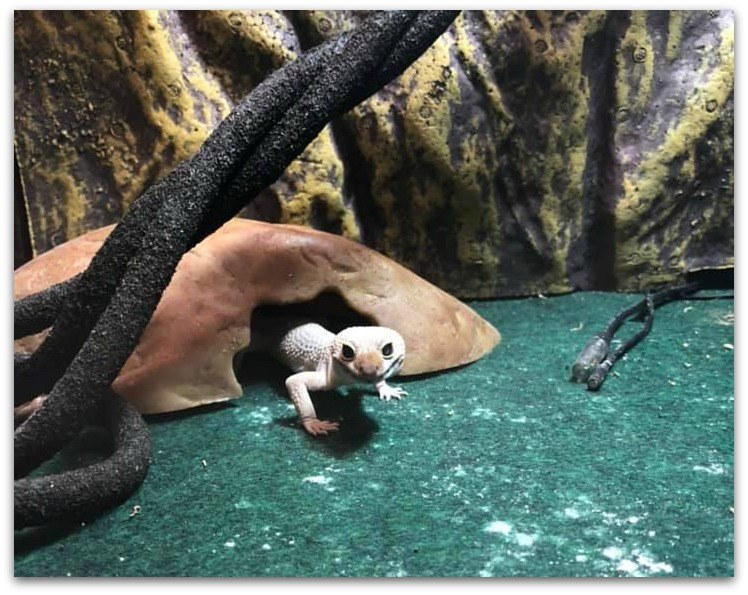 We didn’t film him, because he was mostly hiding in his cave, and my mum said we shouldn’t disturb him, but you can see him here, all white and ready to loose his old skin.

This week I want to tell you about leopard geckos and their tails.

First thing to remember though…

If you do ever grab a leopard gecko by its tail, I’ll tell you what happens the tail just falls off.

But don’t worry it grows back. It will look funny for a while, but it will eventually grow back.

It will take up to 65 days, and  may look a bit different but it will grow back.

But you shouldn’t ever grab your gecko by his tail, or pull it’s tail.

Some facts about leopard gecko tails.

Did you know that a leopard geckos tail only falls during long amounts of stress or death? They also use it to escape, if caught by their tails, they can let them drop off so they can run away leaving just their tails behind them.

Did you know that a leopard gecko stores food inside his tail, as fat, and to get that food into the stomach the leopard gecko just shakes it. This is handy if they are not able to get any food, they can survive for a while, on the fat in their tail.

Did you know that a leopard gecko can lose their tail several times?

Leopard geckos are clever. Handy to have a tail you can rely on for food and to help you escape…

Spotty has never lost his tail so we haven’t got any photos of what a gecko looks like without a tail, but this video shows you what it looks like when their tail comes off. The old tail wiggles and moves for a bit, which is a bit yucky, I think.

Would you like to have a tail? I think I would.

Posted in Pet's Corner and tagged A boy and his gecko, Leopard gecko, Spotty's Sunday.