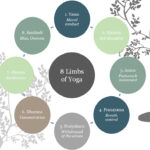 Often we think of yoga as being bendy or meditating, but did you know that the physical yoga we practice in the west is just one part of the practice? The overall objective of ‘yoga’ is to follow a spiritual pathway to enlightenment. The Asanas(poses) are one of eight points known as ‘The 8 Limbs of Yoga’, which is a moral guide arising from the Yoga Sutras, written by a sage called Patanjali around 3,000 years ago.  In […]