Some time ago, we decided to move Little Man into his sisters room, so they could share a room, while they were still of an age where it would work. We are lucky that we could make that choice and that we have the space to be able to have separate rooms if needed. If we have a third baby, someone will be sharing a room once the baby is no longer sleeping in our bedroom, and we thought it would be a good idea and fun for them, to be together. We hoped it would help Little Man sleep better, and that it would be good for their relationship. They adore each other, but have their moments where feisty little brother meets slightly bossy older sister and you have differences of opinion galore!

My plan was to convert the old toddler room into a temporary work room/study/playroom/guest room, until we add to our family. Of course, that hasn’t happened, and the room has become a dumping ground, laundry room and general heap where things get put if they have no other home.

It’s lasted for nearly 8 months. It’s been ok, sometimes they love being together, and play really well, and enjoy each others company, and other times, it’s frankly, hideous. When Big Girl has friends round to play, they don’t want little brother in the picture, and of course it is his room, as well as hers so there is often a tear stained little boy sobbing on me, when his sister and her friends don’t want him to join in (and no, joint play dates don’t work, we have tried that, that’s a whole other post) and also, bedtimes are HARD. She is 3.5 years older than him, she wants to and is able to stay up later, than him, and she wants to read, or listen to music, before she goes to sleep, and he often is disturbed by this. She could do this in our room, or downstairs, but it disturbs the general peace of bedtime. He can settle in our room, and then we move him to his own bed, but again, it’s not ideal. 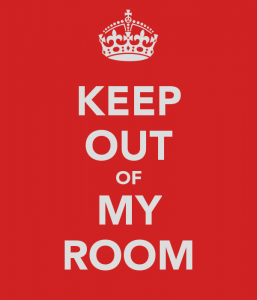 So, we have decided to go back to separate rooms for now. I guess we could make it work, we could just plod on, and make them live in each others space (don’t get me started on the mess, and the issues around when personal belongings get touched or played with when they shouldn’t) and frankly, I am too tired and busy to try and juggle the politics of bedroom sharing. Little Man needs his space right now, so does Big Girl, as she gets more homework, and also wants time out, to read and have quiet time to herself,  and whilst it was fun, I don’t think it has worked for us. So back to a room of their own each we go. Thankfully we didn’t re decorate or re arrange too much.

I would love to know how other people make room sharing with siblings of larger age gaps and or different genders work, or do you think it doesn’t work? Should we have stuck it out? Or do your kids have their own space and are happier that way?