It’s Breast Cancer Awareness Month, and I have been asked to write about and share some facts and information on Breast cancer, this week. This is the first in a series of posts, all about breasts. This is not just for women. Men can get breast cancer too, so if you are a bloke, reading this, and have women in your life, it’s important for you to read and share this information, with them, as well as being aware that men can also get this disease, although it’s much rarer.

In 2005, whilst LSH was on a work trip in the US, I was washing myself in the bath, when I found a lump, or what felt a lump, in the breast tissue, that was not normally there. It felt about the size of a 20 pence piece, but was slightly tender to touch. I was 29. We didn’t have as much Dr Google, then, the internet was there but not as useful, or helpful (I am not sure the internet is any more helpful today) so I quietly freaked out, inside, called a good friend, who is also a nurse, and she told me to call my GP and get it looked at. This was before the children were born.

At 29, I was not in the “at risk categories” according to the statistics, but because I do have a family history of breast cancer, my GP and nurse have always encouraged me to do breast exams and to report any issues or concerns I have. People are becoming more aware that breast cancer is not just a disease you get if you are older, and post menopausal, and there are types of breast cancer that can occur at any age, including younger women and men.

I rang my GP and was given an appointment a week later. I spent a week worrying, because although the common sense side of me knew that it “probably” wasn’t breast cancer, there is always a nagging doubt, and you don’t know, until you have been told by an expert.

My GP was lovely, a little bit too nice. She told me it wasn’t likely to be “anything serious, at your age, but lets get you seen as soon as possible”. She referred me to the hospital, and I called and made an appointment to see a doctor who would examine the lump and then decide what we needed to do about it. She did take some bloods, and told me not to worry too  much.

Three days later, I was at the hospital. I saw a very lovely doctor, who examined me, and told me he thought the lump was a cyst, and he was going to arrange for me to have an ultrasound, then probably drain the cyst using a needle under local anaesthetic. He was very reassuring and I began to feel a bit more relaxed.

That visit, however, hit home hard. In the waiting room, were a number of women, some my age, some older, waiting to be seen, by breast cancer specialists. It made me realise that I probably was incredibly lucky, and should be grateful, that I was not going to be given a diagnosis of breast cancer.

I had an ultrasound, and the conclusion was that it was a slightly blocked duct, that had developed into a fluid filled cyst, that would probably need draining.

It was arranged for me to have this done, and it was painful, but bearable. They injected local anaesthetic into the area around my breast and under my arm, then used a rather large and scary looking needle to drain fluid out of the cyst, under ultra sound guidance. The fluid was sent off to be tested and I was put on a course of antibiotics just in case there was any infection in the area. Ten days later, I went back to be checked, and the cyst and the area around it were healing nicely, and I was told that it was just a localised infection, and all was clear. My relief was palpable. It’s a common thing, that can happen to women aged 30-60, and is easily dealt with. 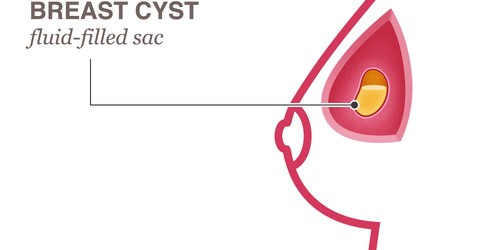 My GP and the consultant who saw me, did say they were glad I had checked, and encouraged me to keep checking my breasts and underarm tissue. They said that often women of my age (then, think that they can’t have cancer because they are so young, and healthy, and ignore lumps, only to find that actually it can be something more serious, and harder to treat, when the lump or bump doesn’t go away, or gets bigger, or has spread).

So, I was lucky, I was able to get seen fast and find out that the lump was not cancerous, and have it treated easily. There are women who are not so fortunate, as well as men. It’s always worth getting anything suspicious looked at, quickly, and dealt with. Check your boobs. Know your body, get anything that is worrying you or doesn’t seem normal looked at. It’s not worth ignoring it.

Posted in Everything else and tagged Breast Cancer, Breast cancer awareness, Breast cysts, check your boobs.