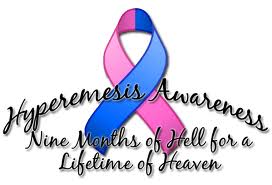 Disclaimer, I am NOT pregnant. However, the Duchess of Cambridge is, and I am delighted for her and Prince William. We’re big Royal Family fans.
I am not delighted at the fact that the poor woman is suffering from hyperemesis gravidarum and has been hospitalized for treatment. I feel incredibly sorry for her, having suffered from the condition myself in both pregnancies.
I’ve found myself getting incredibly annoyed at various news articles and even medical professionals calling it “morning sickness” and being patronising or dismissive of it.

Hyperemesis Gravidarum
HG is a debilitating and potentially life-threatening pregnancy disease marked by rapid weight loss, malnutrition, and dehydration due to unrelenting nausea and/or vomiting with potential adverse consequences for the newborn(s)  (source – http://www.helpher.org)

With Big Girl’s pregnancy, I started feeling nauseous at 5 weeks. By 6 weeks I was throwing up more than 20x per day, and when I wasn’t actually being sick, I felt nauseous and dizzy. I couldn’t keep any solid food down, other than small amounts of flat coca cola or peppermint tea, and a slice of dry toast with Marmite, or occasionally a small bag of McDonald’s fries, if I was lucky. (I normally can’t stand them, but oddly, they were one of the few foods that I could keep down)  I had to take time off work, because some days I literally sat by the toilet, at home, all day, or lay in bed, trying to fight of waves of nausea. I couldn’t handle any smells, changes of room temperature, and riding on public transport was impossible and was generally miserable. Unfortunately, the health authority I’m under was not keen on prescribing medications for this condition, and there are lots of myths perpetuated about the risks of taking anti emetics during pregnancy, so whilst My GP was sympathetic and kept telling me “it will stop soon”, I wasn’t able to get medication straight away. I managed to struggle on, but felt dreadful, and basically became a hermit, unable to do anything much around the house, go out, cook etc. Finally, at my 13 week appointment, my midwife, concerned that I had lost weight, was quite dehydrated, and looked dreadful, admitted me to the monitoring unit of the Maternity clinic, hooked me up to IV of fluids and gave me some anti emetic medication. She got one of the doctors to write-up a prescription for me, and I was allowed to go home, and although the medicines didn’t entirely stop the nausea and vomiting, it did ease things enough to be able to cope better. It finally stopped when I was 28 weeks pregnant.

With Small Boy’s pregnancy, I had more of the same, except I was dealing with a toddler as well as trying to function whilst continually throwing up. I gained no weight  until 32 weeks of pregnancy, and again had two episodes of being admitted for fluids and medications. There were days where Big Girl and I would sit on the sofa, watching tv, with a bucket next to me, or I’d lay on the floor in the toilet while she pottered about, occasionally coming to pat me on the back and say “Poor Mummy” as I threw up. I fainted twice, when out, because I felt so unwell. If and when we do have another baby, my GP will be prescribing medications for me, and I will be monitored closely. With both pregnancies, I tried all the remedies, potions, teas, eating small snacks, avoiding foods, accupressure, etc out there, nothing helped. With HEG, all of these remedies don’t make much difference. I was fortunate that neither of my babies were badly affected by my illness, it was just me that suffered, in some cases it can affect the baby as well as the pregnant mother. Thankfully, the local authorities have relented and loosened the criteria for women needing anti sickness medication when pregnant, and to be honest, the risks of taking a medication when pregnant are far outweighed by being able to cope and function, even if it’s not fully. Unfortunately my teeth have actually been damaged as a result of the constant nausea, my dentist had me use a special toothpaste to restore some of the damaged enamel that was the result of constant vomiting.
Many women struggle with this illness, it is not a “normal” symptom of pregnancy, it is not morning sickness. It is actually a fairly severe medical condition, that can lead to all sorts of serious medical complications for some.

Some links on HEG:

So, folks, it’s not morning sickness. Please stop calling it that. Don’t assume that the Duchess of Cambridge is having a cushy rest in hospital for a few days because she feels a “bit sick”.

Back to your normal scheduled program. Rant over! I hope the Duchess is feeling as well as can be expected with such a condition and is allowed home to rest and to be left in peace to get on with her pregnancy.

Posted in Everything else and tagged birth, Duchess Of Cambridge, HEG, Hyperemesis Gravidarum, morning sickness, Pregnancy.