Two years ago this week, I got the phone call that everyone who has a spouse/partner/child who uses a bicycle dreads.  It was about 620pm. LSH was on his way home and he had messaged me from the station that he was jumping on his bike and almost home. He cycles to the train station, folds up his Brompton bike, then uses the train to get to London, then cycles to his office. It’s his way of keeping fit, and he has been cycling since he was young, and has raced, and cycled all over, on all sorts of terrains, so whilst I sometimes worried about him cycling, I didn’t think about it too much. He normally is home within ten minutes of messaging me, but after 20 minutes, I was a little concerned. The phone then rang. It was him, he was slurring and I could barely hear him. He said “I’ve come off my bike, I think I hit my head, I can’t see where I am” then he stopped speaking.  I was on my own at home, with the children, it was a dark, wet, winter’s night, and I had no idea where he was, other than that he would be on a certain road out of Richmond, somewhere between our house and the station. Thankfully, a passer-by in a car stopped, and was with him, and he took the phone off him and spoke to me, and were able to tell me where they were, and that LSH was conscious, but very dopey, and that he had called an ambulance for him. I never met this person, he left after the paramedics arrived, but he stayed on the phone to me, until they arrived and he got LSH off the road, and kept him safe and kept talking to him, until they did. I don’t know how I can ever express how grateful I am that he was there. I called a friend and neighbour, who came over, to be with the children, called my brother-in-law who lives locally, and her father gave me lift to the accident site. I arrived as the ambulance arrived, the initial paramedic had arrived in a car, and immediately called them, to take LSH to hospital. They assessed him, and he was taken to the local A&E, and I rode in the ambulance with him. My friend’s father packed up the bike, and bags and helmet into his car, and took them home.

Thankfully, apart from a fairly severe concussion, some damage to his ribs and shoulder, and some bad bruising he was actually  “ok”. He was very dopey, kept talking about random things, couldn’t really remember where he was or what had happened, and was pretty shaken up. My brother-in-law met us at the hospital, and after he was seen, assessed and observed, the consultant, knowing I was a nurse and knew what to look for in a head injury, said I could take him home. He did say that if LSH hadn’t been wearing a helmet, he likely would have been very severely injured, possibly killed.

He came off his bike in a notorious area of the Petersham Road, where many other accidents, both cycle and car have happened. The road was very badly lit (still is) covered in shocking pot holes, and was wet and slippery. He misjudged a pothole, and slid, skidded, and came off the bike. His head hit the corner of the pavement as he fell, his bike landed on top of him. It was no-ones fault, although I did harass Richmond Council for months afterwards to get the road lit and the pot holes repaired (they were finally dealt with during the preparations for the Olympics, because the cycling races used that road, and of course, Olympic cyclists can’t cycle on shoddy, pot hole ridden roads now, can they, but they weren’t worried about ordinary cyclists. It’s still a slightly sore point with me, as you can tell)

I don’t think the seriousness of the accident hit me or what the consultant said, until the next day, when Jim, our friends Dad, dropped off LSH’s bike and bags. I picked up his helmet, and it fell apart in my hands. 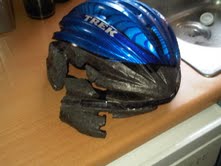 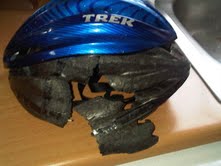 Basically, his helmet took pretty much all of the impact. When I look at these photos, when I held his helmet in my hands, I realised, that this could have been his head. I don’t want to think about what could have been if he had been like a large percentage of the population and chosen not to wear a helmet. He is alive and well, and with us. He may not have been, or he may have spent many weeks in hospital, with a serious head injury, and we would have had to live with the results of that. I am beyond thankful that for the small amount of money we paid, for a helmet. I know he also is grateful, and he’d rather have helmet hair, and have to wear one, than face what might have been. He has dealt with some long-term consequences of the accident, but he could have been far more badly injured than he was, so we have coped with these things, and two years on, he is pretty much back to normal, the side effects are subsiding with physiotherapy and other treatments.

I know that some countries, such as Holland, have a lot more cyclists, than in the UK, and they don’t as rule wear helmets, and their head injury statistics are lower, but they have a safer set up for cyclists, it’s encouraged, and looked on as positive thing, whereas here, frankly, I think cyclists run a death risk, on most of our roads. I do admit that some cyclists are not responsible and behave badly on the roads, and run risks which are not acceptable, and I also know that if a helmet is worn incorrectly, and not positioned properly, or is ill-fitting, then it is pretty much rendered useless.

Basically, what I am trying to say, is look at these photos, and tell me, why you think it’s ok not to wear a helmet when you’re on your bike? Why would you take the risk. LSH is an experience, capable, confident cyclist, with over 25 years of cycling under his belt, and yet he came off and hit his head, in a simple accident. When I see people riding with no lights, no helmet, on roads, I cringe. When I see people letting their children ride without helmets,  I want to show them these pictures and tell them what happened to LSH.

It isn’t a legal requirement to wear a helmet when you cycle, it probably never will be, but really, it should be. Why would you not want to protect your head, your brain? For approximately £30, you can make yourself safer, and add a layer of protection, and reduce your risk, if you did ever have an accident.

Look at these photos, picture that broken shell, as your head, instead of the helmet, and then tell me you’d prefer not to wear one…..?

Buy a helmet, make sure it is correctly fitted, wear it properly (any cycle shop can do this for you and show you how to wear it correctly) and wear it. Don’t be a statistic. It’s not worth the risk, and it could save your head, and your life.

Posted in Family Life and Parenting and tagged Bike safety, Cycle accidents, cycle helmets, cycle safety, safe cycling, why you should wear a helmet when cycling.