When your child is one of those toddlers/children who is feisty,  has a healthy pair of lungs, and is going through that wonderful tantrum stage that those of us who have experienced know so well, and those of us who had children who never went through it, sigh with relief that it’s not their child turning purple with rage and screaming like a demented opera singer?

What do you do?

We have had a long week, with Small Boy, lots of emotions and frustrations, normal behaviour for a bright little boy, of his age, whose speech is very good, but sometimes still gets VERY angry and frustrated when life doesn’t work the way he wants it, or he can’t make what he wants known clear, or he has made his wants clear, but they are not being granted, (either because I can’t or won’t) and he will not compromise or be distracted.

We’ve had a number of very public tantrums this week. I was one of those parents with a child screaming loudly in the supermarket, because we had walked past the sweets at the checkout, right at his eye level, at 9am, in the morning and I refused to buy him any. He was very upset, (I was also upset, I know why they put sweets there, but I wish they wouldn’t) and would not be distracted by offers of slightly more nutritious, less sugary treats (a banana, some dried fruit) and I wasn’t going to capitulate and buy sweets, so yes, if you were in Tesco’s in Kingston last week, chances are that was my child you heard bellowing while you tried to buy your milk and bread. Sorry about that. I couldn’t walk out of the store, we had to get supplies, we had to be somewhere, there was no other option.

He also lost the plot entirely at the child-minder’s when Big Girl and I collected him, after school. She has been looking after him for over a year, for two mornings a week, and was astonished at his lung capacity and vigour. He never does this for her, apparently. (Having been a nanny, and babysat countless number of children, I know this, often children do act up for their parents, not their caregivers, but is disheartening to know that YOU are the one your child is reacting to and for, and doesn’t exactly boost your parenting morale) He spotted Big Girl was wearing her precious tiara, from Christmas, and decided he WANTED it. She actually handed it over, for a few minutes, but then wanted it back. He of course refused, and would not be offered any alternatives. He lost the plot. Cue 15 mins of screaming, kicking, refusing to get his coat and outside clothes on, and I ended up having to wrestle him into his pushchair, all the while, other parents collecting children, and my child-minder trying to help me calm him down. Fun, it wasn’t. I couldn’t just leave him to scream it out for a few minutes, he wouldn’t be held or calmed down, he basically was angry and wasn’t getting what he wanted! Should I have made his sister hand over her precious item, simply because he wanted to have it and was screaming? I don’t think so! Did I try my hardest to calm him down, reason with him, distract him? Yes, I did. Did it work? Um, no.  We couldn’t sit and wait it out, we again had to be somewhere, (a dental appointment, I can’t just pitch up 1/2 an hour late at my dentist, miss my slot, then have to pay the fee, regardless)

We also had the child screaming on the bus scenario, which is my firm favourite stress inducing activity. When your slightly tired 2.5 year old decides he wants the item his sister has, which is exactly the same as the one he has (a Happy Meal toy, yes, I took my kids to McDonald’s, what can I say…?) and when she very kindly agrees to swap, so he can have the same toy, and he then decides he doesn’t want it, hurls it on the floor, it breaks, and he then begins to wail, loudly, then yell loudly and nothing I can do can calm him down. The dirty looks from the other passengers and tuts, sighs and general grumpiness don’t help a parent in this situation, by the way. Kids loose the plot, they get upset, they cry. It’s a horrible place to be, with your upset toddler, on a bus full of people who you feel are all looking at you like you win “Worst Mother of the Year” hands down.

Well what I do, or what I try to do is remain calm, (it’s incredibly hard, I have often wanted to yell back at him, but I know that won’t help, will make it worse) I try to calm him down, I offer distractions, I talk to him, I sing. I have even stooped to bribery, if I have items on me which can be used for such a thing. If all else fails, I basically have to grin and bear it, trying to look as calm as I don’t feel inside, trying to smile at the people around me who are giving me pitying or “shut that kid up” looks, and hoping that he will calm down. He actually responds best to this, most of the time. He gets angrier if I try and placate him, or reason with him. He sometimes just needs those few minutes to vent, to realise that he isn’t getting what he wants and then he usually slows down and stops. Unfortunately, occasionally (and too often this week) it has happened in public, and the rest of the world has been subjected to it.

If you’re a parent who knows what I am talking about, I am in full sympathy. Before I had children, I often looked at the woman who’s shoes I am now in, with a bit of an “why can’t she stop that kid yelling” attitude, but now I am a parent, of a spirited  high needs child, I regret even thinking those thoughts. If you don’t have a child like this, or you don’t have children, or your kids grew up a long time ago, and you’ve forgotten what it’s like, have a little empathy, bite your tongue, don’t mutter at me, or about me or my child, and maybe even offer me a smile of support, or acknowledge I am doing my level best, that I am not enjoying the situation much, either, and would give anything to not be dealing with a tantruming toddler in the middle of the supermarket, the bus, at the childminders, in the pool, at the doctors surgery, in the school playground… 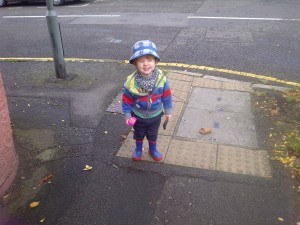 (Small boy, not cross, yes, he’s wearing a sun hat and wellies, don’t ask me why, who knows the mind of a determined and feisty 2.5 year old? I certainly don’t. I am trying though!)