I used to be one of those people who thought I knew it all about parenting, and that I would be a perfect parent, that is, until I had children, and then realised how utterly wrong I was, and how little I actually knew about the reality of having your own children

One thing I swore that I would never do, was give my children dummies or pacifiers and that if we did have to use them, they would not be one of those children seen out and about with them, past the age of 1. I used to cringe when I saw toddlers walking around with dummies in their mouths. Big Girl had quite severe reflux, and would want to nurse or feed constantly, and if she did, would then vomit, often quite spectacularly, we used a dummy to help her suck for comfort, and she didn’t use it a lot, and gave up all her dummies when she was 3, and it was a fairly painless process. Of course, this made me feel even more virtuous and proud of myself.

Ha, just goes to show you, doesn’t it how we can be wrong about things? 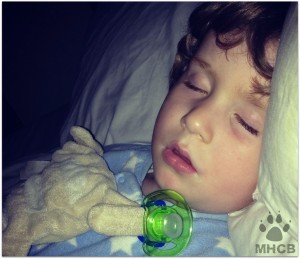 This is Small Boy’s comforter and dummy. He calls it “Narnie”.  He too, had reflux, though not as badly as his sister, and also like a dummy to suck on. We were strict about it’s use and until his ear issues kicked in, when he was about 8 months old, he wasn’t what I would call “addicted” to it. When his sleep issues started, around about the time of his first serious ear infection, he became more attached to his dummy and comforter, and that grew as his ear problems worsened. Our ENT explained that sucking helps to relieve the pressure, similar to when you would suck a sweet or chew gum on an aeroplane to relieve pressure in your ears, and we now realise that part of his attachment to the dummy was for pain relief. He of course, does love it, as a comfort thing, too when he is tired or upset, but for the most part, it helped him, we think.

So, now his ears are healed, and he sleep habits are so much better, we are getting a few gentle nudges from people as to when we are going to get rid of Narnie. I have also had comments from well meaning members of the public (don’t we just love those, as parents?) telling me and him that he is too big for a dummy, and he needs to stop being a baby and we need to “be firm and get rid of it”.

I would like to ease Narnie out, slowly. We are working on not having it in the daytime, unless he is really upset, and I try to find other ways to console him, if I can, but he still has it at night, and occasionally will be seen with it in the daytime, although he can manage without it, and now will volunteer to leave it at home, when we go out.

I spoke with our lovely dentist, a very sensible, practical man, with children and grandchildren of his own, last week, when the children had a dental check up. He had a look at Small Boy’s teeth, and said he does have an overbite, but that it hasn’t got any worse since his last two check-ups and also is likely to be genetic, as he is also LSH’s dentist, and suspects that Small Boy has a similar issue to his father’s in that area and that whilst a dummy is not ideal, he doesn’t think it is making it worse. He has said that he would “like” to see the dummy gone at Small Boy’s next check up, just before he turns 4, which is next year, and that if we can minimise daytime use, in the meantime, then that would be great too.

Small Boy’s speech is slightly below his developmental stage for his age, because of his ear issues, which he will be getting some Speech Therapy for when he starts nursery in September. They don’t think it is serious, and that it will improve very quickly. We are seeing an improvement already, using some tricks and methods we have been given by his nursery teacher and also by a former colleague of mine, who is a Speech Therapist. She did say that the dummy might not be helping his speech, but again, to minimise daytime use and then gently wean it from him at night when we are all ready, is a good plan.

Small Boy tends to do things when he is ready. He self weaned from breastfeeding, he potty trained himself, almost overnight, and virtually started sleeping of his own accord, once his ears were healed,  all with little or no input from me, so we are leaving Narnie with him for now. I don’t think he will be going to school sucking on it, and at some point in the next few months, I suspect he will naturally grow out of it, and like everything else, he will move on. So, when someone tries to be helpful, and suggest we ditch the dummy, I smile, and say “we will, when he is ready”. That doesn’t always go down well, and I have had the odd “you know you need to be tough” lectures too, but I trust my instincts on this one, two separate professionals have given me input, and one day, Narnie will be gone, and my Small Boy will be growing up, and not need it any more.

So, if you see us, please don’t tell us to “ditch the dummy”, we have heard it before, and we DO know what we are doing. I feel slightly wiser, from 6 years of motherhood, we think we are on the right track.

That being said, I still maintain that parenting is a learning curve and that I still don’t know as much as I would like to, or get it right all the time. The days of when I thought I knew what I was doing are long gone…. 😉