“Hormones play a large part in that much loved phase in the life of so many four year olds boys when activity levels surge, and vigorous physical play, and a fascination with super heroes becomes the main stay of the boy’s play. Around the age of four, boys’ testosterone levels in the blood, suddenly double and that little boy changes quite suddenly and dramatically into a strong active child with limitless energy and a fascination with rough and tumble and very boisterous play. Mercifully for the boys and parents, this hormone level drops around the age of five to normal levels”

The above quote, pretty much describes where Small Boy is at, at 3.5 years of age. He isn’t quite 4, yet, but I have read other articles that say the “testosterone spurt” can happen from 3-4 years, it just depends on the child and their personal growth and development.

Boy, do we like rough and tumble, and are we strong and boisterous? Do we have limitless energy? Yes!

I knew having a boy would be different from having a girl, not in the stereotypical “boy versus girl” but just that they are different, physically and emotionally.

It’s been a while since I looked after a little boy, and I think having your own children is vastly different from being a nanny or a day care provider. I don’t remember the boys I looked after going through this growth spurt, but I am pretty sure they did. All the parents I know of little boys of Small Boy’s age are noticing the changes emotionally and physically and commenting on how their needs are changing.

Small Boy seems to have limitless energy, when he crashes to sleep (and he does, he literally falls into bed and passes out) I would say this is probably the only time he isn’t on the go, except for meal times, and even they aren’t the quiet, calm things they were with his big sister. Lots of boundary pushing goes on there. He runs everywhere, wants to climb, jump, bounce, hurl himself, and generally is very physical. His contact play with his sister, and LSH and I, and some of his peers can be quite rough and almost “aggressive”. He will try and tickle and rugby tackle, because he wants to play, but can be just a little bit over the top with it. He does also lash out more, and struggles to deal with his emotions and will want to hit physically, as his brain tries to process things. Again, we didn’t have this with his sister. She would have dramatic tantrums, but was not physical.

I must admit, until I started reading about the hormone growth spurt at this age, that can last until they are 5, I was a bit concerned that Small Boy’s behaviour was out of control and that we were doing something wrong as parents, but thankfully talking to other parents, and also lots of research and reading, has assured me that he is normal, and that there are things we can do to help him process this change and learn to handle himself better, and also for us as parents to learn to handle him better.

There are several things we are trying to implement:

LOTS of physical exercise. We already walk everywhere, but within reason (weather permitting) I try to get him out and about every day, both morning and afternoon, even if its just to run down to the common to chase some birds or kick a ball about. He has also started a dance class, and will be starting swimming in January, and I am looking at enrolling him in a football group near us, when he is 4. He loves being outside, running around, chasing, catching, and just burning off energy.

We are also trying to help him handle emotions better. When he is angry or upset, trying to help him calm down, so he doesn’t lash out, and talking to him. Yesterday he was very upset because he realised his sister was going to a friends house for tea, and wouldn’t be coming home with him. A full on 3 year old meltdown took place as we got home. I kept talking to him, and eventually he calmed down, and responded to me, echoing my words to him “I cross, I want Ellie to be home” and I can see that he is actually quite frightened by his own anger, which doesn’t help things. We still have firm parenting boundaries, and there are things that are not acceptable, and things we will react to, in terms of behaviour, we are trying to help him to calm down, and try and process things, and also for myself, particularly, trying not to get angry back, because that does not help the situation either.

We do have boundaries in place. Biting, hitting, kicking, physically trying to hurt are not acceptable. He is also not allowed to hit objects or throw things, but I have given him a big squeaky ball, that he can pummel and hit, when he is really frustrated, and good old Sophie the Giraffe is useful, as he can bash her about.

Sleep is also important (ha, you didn’t think I could write a blog post without mentioning that, did you?) he needs a good nights sleep, and the right amount, to be able to function. Like most human beings, when he is tired, and lacking in sleep, the world is definitely a much harder place to handle. When he is tired, or overtired, I can see the physical, and emotional surges are even more pronounced.

It’s an interesting stage and age. It will pass, and we will move onto the next developmental milestone or stage. As always, I realise how little I knew about parenting, until I had my own children, and each day I learn something new. We will ride this surge and stage and as he grows, and changes I am pretty sure we will too. Who said parenting was easy? I bet they didn’t actually have any children! 😉 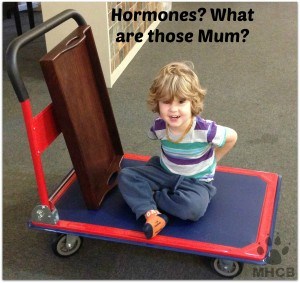 And that’s me out for a week. I’m taking half term off of social media. Today I’m deep cleaning the work kitchen, tomorrow a day with the teen, rest of the week decorating a room at home. Then family time. I’m at @mrsreekierants a bit here and then to say hi. See you next week!