This week my rant is aimed at people on social media, who actively go around, looking at other peoples blog posts, pages on Facebook, Facebook profiles (if they are not set to private) Instagram accounts, and Twitter, to offer unsolicted advice, usually parenting advice. 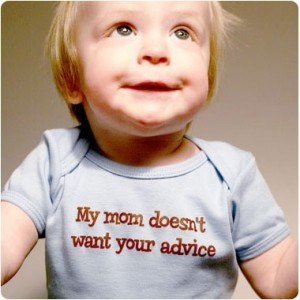 So, yes, I write a mainly parenting blog, but it’s not meant to be a blog to advise, or even tell other parents what do to/not to do. I hate the expression “when you know better, you do better” that I see quoted a lot, in various places, usually aimed at making a point that someone is superior because they have figured out the right way of parenting, or whatever. Blah, I say.

I happened to post a picture of Small Boy in his car seat, on Instagram last week. My profile is usually private, but what I hadn’t realised was that whilst messing around with some settings, to see if I could add it to the blog, I had changed that to public. So when I posted a photo asking for some advice on adjusting his seat, I was surprised that a few people who I had no idea were following me commented. I was given the advice I needed, and I did ask for it, so I had no problem with that, but I was curious as to where these people had come from, as they don’t follow me. It turns out there are a raft of people out there, who like to find certain hash-tags and then go and see the photos pertaining to that, and then offer advice, not only on car seats, but feeding, sleeping, and other things to do with parenting/child care. Sort of a self proclaimed set of experts who like to share their knowledge. Some of it good, practical, and sensible, but most of it unasked for and a lot of the time given in a “we know best, you’re stupid if you don’t do what we say” type of way, which is, as most people know, not the way to get someone to do something or even appropriate. They also do it on Facebook, and Twitter, apparently. I have also seen so many blogs and FB posts where people assume this smug position of making out they have the answers in terms of parenting. I happened to mention my experience to a group of friends in a parenting forum I am on on Facebook, and they all nodded sagely and said they had seen similar.

I get that people are passionate, I get that people believe in certain parenting styles or ways. I myself am passionate about many things, to do with parenting, and children, but I don’t get why people think they have the right to find other people, then tell them what to do, without being asked, and then getting offended when their advice, well meaning or not, is refused or taken in not so polite ways.

Seriously? Surely people who have children have plenty to be doing, looking after their own children, and being perfect “knowing better” parents, to then to be going round telling other people what to do? Obviously not, I guess. Ironically, I did a bit of social media stalking myself, and one lady, who had been quite vocal to me, on my car seat choices, who proclaimed herself an expert, has photos of a very dirty house, seems to spend a lot of time posting photos of the alcohol she drinks, and the nights out she has, then complains the next day that her kids are being brats, none of which is any of my business, but it did annoy me that she feels she can tell other parents how to parent and criticise our choices, be they right or wrong, at the same time pretending she has it all together. Social media allows for a high level of hypocrisy and fakery, I guess to be expected.

The banned phrase in our house this week is “know better, do better” and LSH has been very naughty and using it at every opportunity, to get a rise out of me!

Do you agree or disagree? (I promise I won’t tell you off and that you are wrong if you don’t agree with me… 😉 ) Is it OK to go around offering unsolicited advice, however well meaning, on social media, to people you don’t know? Is this the new thing, or I have I just been in some naive bubble somewhere?

Don’t forget to link up to MummyBarrow’s blog too, for other Ranty Friday posts!