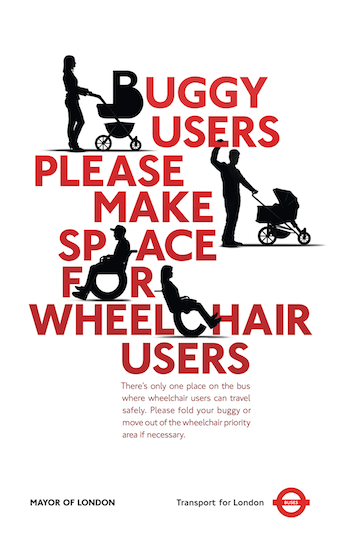 There’s a story, in the news this week, that caught my eye. It’s an interesting one, and the outcome could have the potential to affect all parents of small children who use public transport, with pushchairs.

A disabled man, who was not able to board a bus, after a women refused to move her pushchair, which held her sleeping baby, took the bus company running the bus service to court. The judge ruled that the bus company “had been discriminatory, by not requiring other passengers to vacate the space reserved for disabled travellers”. The bus company has taken the case to the Court of Appeal, asking 3 judges whether wheelchair passengers should have priority over other passengers, to use the space, as a matter of law. It will be interesting to see what is decided. I strongly suspect, that they will decide in favour of the disabled persons rights. This means anyone with a pushchair will have to fold it, or move, or leave the bus, in favour of a wheelchair user. This rule is enforced where I live, by the bus company we use. Many people disagree with this. Does he have the right to the space over other people?

The law says he did because disabled people are a “protected group” under the Equality Act 2010. This means that they have a legal right to protection from discrimination and access to facilities, including public transport. The same protection is not given to parents travelling with pushchairs, because they have other options – they could fold the pushchair away, and sit with their child on their lap. (BBC News Article)

I can see things from various perspectives.

I am a parent, (and have been working with children, for 19 years) and as a non driver, have to use public transport to get myself and children where we need to go. I am used to getting on and off buses and trains with pushchairs and children in tow. I am very used to getting around where we live and further afield on public transport. I have, on many occasions, been refused access to the bus I wanted to get on, because it was too full, or because the space used for wheelchairs was full with either a wheelchair user, or other pushchairs. I have been asked to, and have willingly folded my pushchair, when needed, and yes, I have been asked to get off a bus, when I couldn’t fold my pushchair, and a wheelchair needed to get on. I have used transport with double buggies, singles, posh ones that don’t fold, and ones that do fold up easily. I have wrestled screaming toddlers onto my lap, and juggled shopping bags and small babies.

It’s a nightmare, when you get on a hot, busy bus, that’s full, and you have a child in a pushchair. People don’t like it. It is a pain, I know. It’s not fun having to ask people to give you space and to let you in. It’s horrible having to try and fold a pushchair, with a baby and shopping. It’s not pleasant to be asked to leave a bus to let a wheelchair on. I do not ever decry that it seems horrible unfair. It is. To have to take longer to get somewhere, or wait for the next bus to let you on is a pain and inconvenient. Sometimes people are kind and help, hold the baby, help you with your shopping as you battle to fold a wet pushchair, and sometimes they stare ahead, pretending not to see you struggle.

However, it is also not pleasant and can be very humiliating, when you are in a wheelchair, and you either cannot get on a bus, because people won’t move, or people are rude to you. I have seen a woman, brutally lash out at a lady in a wheelchair. She point blankly did not want to fold her pushchair, and put her toddler (who was awake) on her lap, and cursed and swore, spat and screamed at the very embarrassed wheelchair user, and the bus driver had to intervene and ask her to either fold her pushchair or get off the  bus. She eventually did, after a lot of pressure from him and her fellow passengers. It was a horrible experience. I have also tried to get on a bus, with a disabled teenager, in a wheelchair. She didn’t “look” disabled, her disabilities were invisible, but she needed her wheelchair in order to maintain normality and get on with her life, but the bus driver and a passenger felt the need to question me (in front of her, when she was perfectly able to communicate herself, I was just going to a medical appointment with her, as her support worker) as to “why does she need that chair? She looks fine!”. I have also tried to get on and off buses where the ramp to allow safe exit and entry to the bus has not been working. That’s hard enough as someone lifting a chair, but if you are actually in the chair, and can’t, what are you supposed to do? People in wheelchairs are  not being bloody minded, or difficult, because they want to use public transport. They also have lives and places to go, jobs to go to, appointments to be at, or even basic things such as shopping to get done. Under the law, they are protected and have the right to access all facilities, to enable them to get on with normal life. Buses are no exception. When I am on a bus, with a pushchair, I am always on alert that I might have to fold it, or move, to make space for a wheelchair user. It’s a fact of life. It might be annoying, and inconvenient, but as it stands, I have no choice. I have heard many stories from friends of also being asked to leave buses (one friend, a few weeks post c-section who couldn’t lift or fold her pushchair, and was left in the cold to wait for the next bus, and another who was shouted at by a bus driver, when she didn’t fold her pushchair fast enough, with little help from her fellow passengers) there are MANY similar stories out there, most parents can sympathise. What do we do to solve this?

What is the solution?

The government encourages us to use public transport to get where we need to go. The whole bus system needs to be revamped so bus space is more flexible, with more spaces that can be adapted as needed (in other countries buses have chairs that flip up, a simple way to make more space when needed for wheelchairs and pushchairs) and more buses need to be in service. I have sat and waited at a bus stop after 4 buses have gone past too full to allow my pushchair on, in pouring rain. More buses, sticking to their schedule, would help. Also, to be blunt, people need to be less selfish. If you see someone struggling with their pushchair on a bus, trying to fold it, deal with shopping, and a crying baby, don’t just tut under your breath and think they should have stayed home, or “well, she chose to have a baby, tough luck on her, getting on a bus during the rush hour”, show a little compassion, offer to hold the baby (they don’t bite, even if they do cry) or help her fold the pushchair. If  a wheelchair gets on, make space. It’s not only pushchairs that have to move, technically able bodied passengers do to.

I would go as far as to say, that if like me, you use public transport a lot, with small children, to think about what pushchair you are going to use. I deliberately chose one that did fold easily, when needed, because I have used those that don’t, and I knew that wouldn’t work. Obviously this is not an option most parents think about, if they drive a lot, but for me, it was a no brainer. As much as I wanted the much more pricey, non folding, parent facing pushchair, I knew the simpler to fold, lighter to lift one was the better option.

If they uphold this ruling, it will mean many bus companies will have to look at how they enforce the rules on allowing disabled people access to the bus services they provide. It will make life a bit more challenging for people who use buses, including parents of people in pushchairs. It’s something that doesn’t surprise me, in fact, I am surprised it has taken this long, for a case to be brought to such public attention. I guess we shall see what happens. Perhaps this will be the push to make buses better designed and more user friendly in general, not just for wheelchair users so that it’snot about who gets priority, but making it easier for all people wanting to use buses and public transport in general.

What do you think? Are you prepared to fold your pushchair? Do you feel it’s fair to be asked to move for a wheelchair user? Should buses be redesigned to make things easier to travel for everyone? Are you a wheelchair user? Do you have issues using transport where you live or are people accommodating?