Welcome to my first Friday Rant of 2015. You know the drill. I have a chunter about something I want to get off my chest, and you can chime in, in the comments, or leave a link in your comment to a rant of your own, or feel free to disagree with me, free speech is important!

If you read this blog regularly, you will know that we have just come back from an amazing trip to spend Christmas with my Dad in Bangkok. We had a wonderful time, and are slowly adjusting to being home, and back in reality. There will be a blog post with some photos and another blog post about our adventures, later this weekend and next week.

However, back to my rant….

I have flown, all over the world, since I was a small child, I am fairly used to flying, myself and flying with families. I am as a parent, very tolerant of my fellow passengers around me, travelling as families. Flying with small children can be quite stressful. I have to say, on our flights there and back, not only were my own children amazing and coped well, but so did all the children on the flights around us. You get the odd baby crying because of ear pain, and the occasional grumpy toddler, and we had one poor little boy on the flight home who was very air sick, his parents dealt with it all like pros, but what shocked me was the behaviour of the adults on our flights. I get that flying isn’t always fun, and when you are all cooped up in economy class, on a long haul flight, it is tiring and can be a bit frustrating but I was horrified at some things I saw. It seems that airplane manners have changed a lot, since the last time I flew, before Big Girl was born…

One lady wandering up and down the plane in her underwear (she took her trousers off) with her rather skimpy underpants on show, under see through tights. I am no prude, but her bottom passed me at least 5 times in the space of an hour as she walked her toddler up and down (I have no issue with that bit) but apparently getting on a plane means “get your trousers off”? Not sure quite why she thought it was ok, I am pretty sure I wasn’t the only one who was a bit phased.

The couple behind me, who had a fairly heated marital discussion, for most of the second flight back to London. Nearly 8 hours, with much loud and getting angrier discussion on various subjects around a planned visit to family the next week, as far as I could work out. Now, LSH and I aren’t perfect, but we try to keep our disputes private, and I don’t think it’s fair to share your views on your mother in law, your slutty sister in law, and your annoying brother in law, with a whole bunch of random strangers on a plane at 40,000 feet, frankly.

The person (I assume a woman) who went to the toilet and proceeded to leave, ahem, hormonal evidence of her time of the month, all over the seat, and not clean up. I mean, yuck!! I had to go and ask the airline staff if they had any way of cleaning it. They actually closed that toilet for the rest of the flight, I don’t blame them, I am sure they are not paid enough to clean up that sort of mess, and why should they? Who does that, in a toilet that many others are going to be using? Disgusting!

The lady two rows down from me, who took her shoes and socks off, and then sprawled her feet around and across the seat arm in front of her, so that the person in front had a foot almost in their face, and when she was asked, politely, to move her feet, she complained that she had “health issues” that meant she had to stretch her legs and put them up. Clearly the other passenger should have just put up with her toes in view for the 8 hours of the flight.

The chap who decided he didn’t like any of the meals on offer and not once, but twice, called the plane staff to come and change his meal, all  the while complaining loudly about the quality. I am pretty picky but the food was not that bad, and to be honest, if he didn’t like it, or was on a special diet, he should have pre ordered, or brought his own, not had the staff running up and down the plane whilst they were very busy, on a full flight. They were far nicer and more polite than I would have been.

The young men, in front of us, on the flight to Bangkok, who were very excited about being on a plane (there was lots of bouncing on seats, playing with the entertainment system, pushing the seats back and up and switching lights on and off, one assumes they had not flown before?) and then proceeded to share with the whole section of the plane, their plans in great detail for when they arrived in Bangkok, including the bars they were going to, how drunk they were going to get, and what exactly they were going to do to the girls they were going to meet. Graphic, and delightful and my children heard language I was hoping to have them not hear for a good long while to come. I did at one point glower at them on my way past the toilet and comment loudly on how noisy they were but it seemed to make little difference. Shudder!

The man who got on the flight, wasn’t happy with his seats and proceeded to stalk the plane, until the staff had to be very firm and ask him to sit down so the plane could take off, because he wouldn’t believe them when they said the plane was full and he couldn’t swap seats. He tried to hassle a family sitting at the front with more space, because they had a baby in a bassinet, to swap but thankfully the airline staff again told him to sit down and although he grumbled a lot, he did stop.

The lady who decided she didn’t like the smell of the plane cabin and her fellow passengers and sprayed herself, I kid you not, hourly, with body spray or cologne. It was pleasant the first time, but by the end of the flight was getting a little over powering and pungent, competing with the smell of feet, farts and general mugginess that comes with a long haul overnight flight!

People pushing and shoving to get off the plane, and on, and crashing their bags around, regardless of their passengers around them, coughing and sneezing all over fellow passengers, playing games on their phones and tablets with the sound up, loudly, and generally being a nuisance.

Maybe I am too critical, but it seems to me that people forget that you are squeezed into a small space, with no where to go for more than a few hours at a high altitude and that manners and general consideration to their fellow man an be forgotten. Like I said the children on the flight were amazing, but even if they hadn’t been, I would have understood, grown adults, who should know better, I am  not so understanding of!

What do you think? Have you found your fellow passengers unpleasant and uncouth, or delightful. Have you had your own horror stories to share of flights and inconsiderate people? Feel free to comment and share! 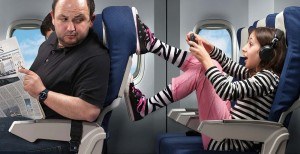 Next week’s rant is about the delightful Nigel Farage, you know you want to read that one! 😉 Have a good weekend. I am off to deal with the slowly decreasing laundry mountain and get two slightly tired and possibly jet lagged children ready for supper and bed!

*Edited to add that these observations were taken over 4 flights, not one, otherwise it seems like I am exaggerating, or have just met a huge clump of awful travel companions on one flight, and yes, I am a people watcher, I notice things other people might not! 😉 *