This is a hard post to write. It’s hard to say what is in my head and heart, without sounding ungrateful, or that I don’t love my child. It’s also hard because I am saying things that I want to say to not only the stranger who might judge me and my child when out in public, but also to friends and family who think they are being helpful, but actually, their words cut me/us harder.

We have a little boy, who had a great start to his life. His birth was easier than his sisters, he had no issues with breastfeeding, he thrived, and was a great sleeper. I made many friends jealous with my tales of how well he was doing. It was a huge novelty for me, because the first time round was hard for many reasons, I made many mistakes and struggled to do many things that were “supposed” to be easy.

When he started getting ear infections at almost 9 months of age, we had no idea, because he didn’t display the typical signs of ear infections, and I was brushed off by health professionals when I suggested that his ears being sore might be the cause of the issues he was struggling with. He cried ALL THE TIME. He would only sleep on me, or with me, he nursed constantly (the sucking helped relieve pain) his dummy was his other source of comfort, he didn’t sleep, or when he did it was in small spurts, not enough for him, or me to be well rested in any way. He became a clingy, sensitive, “high needs” toddler, who hated being in groups, in noisy situations, and in places he didn’t know, or with people he didn’t know. He screamed during swimming lessons, to the point where he would vomit, and stll didn’t sleep. When eventually, after a trip to an emergency doctor, a diagnosis of a perforated ear drum, then a referral to an ENT, then grommet surgery happened, we thought we would start to see some light and that our amazing little boy would find relief, and be able to cope better with life.

In many ways, he has, and he is now doing things and coping better with life, far better than he ever could before he had the grommet surgery. He sleeps better, he is apparently coping with school amazingly and in all respects, if you met him, you wouldn’t think that he had any issues. You would look at me like I was insane, if I told you that parenting him is incredibly hard, and that we don’t feel like we know what we are doing a lot of the time, and that the little boy you see chatting happily, or playing with his toys, is actually a different person, when he is not coping, and that unlike his peers, he still struggles with a lot of issues.

You see, my little boy, probably as a result of the ear issues he had, has a diagnosis of Sensory Processing Disorder and whilst I hate labels and hate having my child known for his diagnosis, I feel like I need to start telling people, so that they will not just tell me “he’s just being naughty, you spoil/pander to him”, “he will grow out of it”, or “it’s just a phase”. It is none of those things. He struggles to cope with aspects of life that other people take for granted, and because he is not quite five years old, he bottles it all up, behaves like an angel at school, and with people or situations he is comfortable in, but when he is at home, or is tired, or has had a day where he has had to cope with new things, or changes in routine, he becomes a different child, and that is what I/we deal with. He spends so much time processing everything to cope, that he gets to a point where he cannot cope any more, and when that happens, he lets loose, and because I am the person he feels safest with, and home or his family are his safety net, we bear the brunt of it.

He gets some help at school, and we will be  applying for help from the local authorities, and also privately, so that we as parents can be the best we can be, and work with him to help him learn to deal with his emotions and the sensory issues that mean he process things differently, so that he can have a life, learn, grow, thrive, have normal relationships, and be the amazing person he is meant to be.

He is funny, incredibly bright, technology savvy, loves reading and writing, adores physical activities, has an amazing sense of rhythm, he loves animals, and would have as many pets as I would let him, and loves fiercely and gives his whole heart to things. He also hates loud noises, crowds, changes in routine, people touching him, having his hair brushed/washed, he will not eat many foods that are slimy, lumpy or sticky, he doesn’t like anything hot, and hates changes in temperature. He won’t wear clothes with labels that tickle or touch his skin, shirts that reach his wrists, or are rough or rustle. He has to have his shoes done up very tight or he won’t walk. He cannot handle group situations, wind in his face, sun in his eyes or bright lights. He will scream at a very high pitch, then collapse, if forced to handle things that overload his senses. He spends all day at school, surrounded by many of these things, processing them, coping, then comes home and basically falls apart on me. We spend most of our evenings getting him to calm down, and relax, and the weekends are pretty hellish too, getting him to a place where he is feeling ok, to then send him back to school on the Monday.

You might say “well, I don’t like bright lights, or loud noises, or people touching my head” or whatever, and yes, many people have these traits, and have particular sensitivities, but he has all of them, and is still, in many ways, a baby, trying to learn to cope with them.

So, I will use his label to describe him. To justify the way we parent, to explain that “no, I can’t just leave him with anyone, for a weekend, so we can go away”, to explain to people why my own child went to a childminder, instead of coming to the popular and lovely music group I run, to explain why we aren’t inviting his whole class to his birthday party, to tell people who say “he will grow out of it, you need to be stricter” that he really doesn’t fit in your box and that he is that bit different, that we will go out of our way to accommodate him. He isn’t just being a brat, he actually just can’t cope, and to be honest, a lot of the time, I am not coping either. I, like him, put on a brave face, and battle on, and express my frustrations, fears and worries in private. I have the occasional meltdown, on the shoulder of the handful of friends and family who really do get what is going on, and don’t try and pat me on the head and tell me I am worrying over nothing.

In the grand scheme of things, his issues and how he deals with life are minor compared to what other families are going through, or have been through,  and I don’t expect special treatment for him or us, but I would like a little understanding, and perhaps, by writing this, to share a little of what goes on in private, not just the public face you see. I love my son, I love him so much it hurts, I want him to have a happy, wonderful life, I want him to be able to cope with the things his sensory issues throw at him. I and we are doing are best, and we will help him as much as we can. I am grateful he is healthy, physically, and that there are ways to help him deal with his issues.

I am sharing this so people understand that it’s not all roses and fairy dust in our home, that what you see of the public me/us is not what is always going on in private. We are fighting a hard battle, like many parents, to do the best for our child. I would ask that as a parent with a child who needs that little bit of extra help, that you don’t judge, don’t tell me how to parent (unless you have child with my issues, then I am all ears) don’t tell me I am imagining it, or making it up, and that you cannot believe he has issues, don’t tell me he will grow out of it (he will grow up and he will grow and learn to cope, his mother has the same issues, she can tell you that you don’t grow out of it, you just learn to manage it) and if I have to leave an event, or a group, or refuse an invitation, or not join something because of my child’s needs, it’s not spoiling him or pandering to him, it’s simply us doing what keeps life as smooth and easy as possible for our family.

This is my son, he is my heart, he also has a Sensory Processing Disorder, but it will be ok, he will be who he is meant to be, with our help. What you see is what you get, it might be a good day, or it might not. When I tell you it has been a bad day, I mean it has been a bad day. I don’t mean that lightly. The good is amazing, the bad often makes me wonder why on earth I am doing this parenting thing. We will get there though, I know. 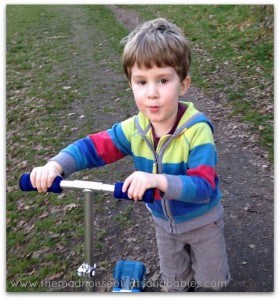 If you are a parent with a child with sensory issues,  I would love to hear from you, and how you are working with your child, to help them get the most out of life, whilst coping with their issues.