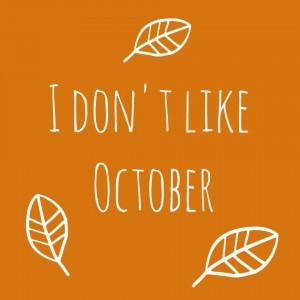 Poor October. It’s a month I hate. I have this irrational dislike of the month, and whilst I know some of it is irrational, there is some logic in there somewhere.

There are bits of October that I do like. I like that half term for the kids falls in October, in fact I start counting down the days, as soon as they go back to school at the end of the summer holidays. I like the autumnal feel of October, and being able to finally justify turning the heating on. I like being able to plan more comfort eating, winter style meals, and I love wearing my woolly jumpers and driving my kids to despair by getting out my whacky collection of winter hats.

But mostly I loathe October.

Why? Because it is such a middle of nowhere month. Not summer, but not fully winter, with random weird weather. One day it’s boiling hot, and I curse myself for sending the kids to school in warm clothes and insisting they take their coats (because they will whine at me, no end, about that “mummy, you MADE us wear our coats and it was BOILING today”) and the next day, it will start out looking warm then by lunchtime will be freezing cold and pouring with rain, and of course I won’t have a coat or a jumper, never mind anything resembling an umbrella and the class teachers will send home notes reminding parents to dress their children appropriately. Not to mention the weird changes in weather, I am convinced encourages all those nasty back to school lurgies we all realise are hitting us one after another, to reproduce in mass and you start to feel like a plague victim with colds, flu, stomach bugs, random fevers and maladies that linger and make life even more challenging.

We seem to spend the whole of October in a state of being unwell. Every year. I think we go back to school, and spend a few weeks naively thinking that this year, our children will not pick up every single germ they encounter and bring them home, after a summer away from what frankly is the germ pit called school, and by mid October I have given up, stocked up on all the essentials needed to cover everything from sore throats to stomach bugs, and vaguely hoping that the rumors I am seeing on Facebook about a norovirus causing chaos are not true and it won’t hit us.

October is annoying because the kids are barely back at school and we are bombarded with Halloween merchandise, but the Christmas stuff is also inching it’s way out (unless you live near me, and have had to deal with mince pies and Christmas cake in the supermarket since the end of August, no I am not joking, I wish I was!) and taking over. Don’t get me wrong, I love Christmas, but I am just not ready to think about decorations and presents in full flow, the first week of October and frankly, I don’t think the self service check out area in Wilko is improved by Halloween decor mixed with tinsel and Christmas stockings either.

My cats are confused by October too. Is it too cold to be out all night, or do we stay in, warm and cozy but then decide it’s actually warm enough to be out, and wake the humans at 4am demanding to be released as dawn approaches? And all the squirrels and birds that are stocking up for the winter and are merrily scampering about, are fair game for cats and a nightmare for us owners who get the dead results to deal with. (Jasper has recently brought home a squirrel he caught and killed, that is not something I want to have to ever deal with again)

Pumpkin spiced lattes? Need I say more. I love coffee, I love pumpkin, I like things that taste like pumpkin spice, but I refuse to drink the combination and I don’t get the obsession with it, that seems to peak in October…

Also, conkers? I love them, but seriously, we must have a collection of about 500, because my children WILL NOT LET ME THROW ANY AWAY. I swear, we have a collection to rival anyone. I find them in the strangest places. I even found three in LSH’s sock drawer this morning and my hand bag has a permanent little pile that is added to as we find them when out and about. I wish we could at least eat the things, then I wouldn’t mind so much.

Oh and the spiders. Seriously, the spiders? I am not afraid of spiders, or at least not British ones (LSH is South African, anything with 8 legs according to him, is deadly, because they are apparently in South Africa) but I spend most of October either walking through the webs that are festooned across our front door and garden path, and spend hours picking web out of my hair, face and mouth and wondering if the web’s inhabitants are lurking somewhere on my person or I peer cautiously into each room every time I enter, because we all know the big hairy beasties that live outside or at least where we can’t see them inside, seem to spend October scampering all over the house, manifesting in the middle of the floor, on walls, in the bath, and wherever you least expect them, to remind you that they exist, they want to get warm, frisky and have fun at the expense of your nerves. Either that or the cats catch them, half chew them, then deposit the remains in unexpected places for me to find and dispose of which is stomach churningly disgusting.

Yup, I don’t like October and my final reason is the clock change that happens at the end of this month. Why on earth we still participate in this ridiculous bi annual ritual of fiddling about with the clocks, changing the times, and then putting up with gloomy darkness each day almost as soon as the children are home from school, I do not now. It’s annoying, my children never adjust and wake up at the wrong times for weeks afterwards and it’s frankly just depressing.

So, I will be glad when October is over. The clocks will have changed, we will mourn the passing of summer and accept that winter is here, the heating will be on properly, the spiders will have been, scared the living lights out of me, and gone again, I’ll start thinking about Christmas properly, and our immune systems will have stopped creaking and I will lessen my attempts to force immmune boosting, vile tasting concoctions down my families throats and embrace November in my woolly hat with matching mittens and count down the days til spring…