I have given birth twice. I have two healthy children, thankfully. Pregnancy and birth were not easy for me, both times, with health issues for me, and concerns about both babies at the end of each pregnancy. All’s well that ends well though, they say, and we all are here to tell the tale. Sadly, it isn’t always as simple as that.

I went into my first birth with grand plans as to how it would all go, and what would happen. I had read ALL the books and thought I was prepared for whatever came at me. I was going to have no drugs, a natural birth, and it would all be lovely, like in those movies where it all looks so easy.

Sadly, my daughter’s birth was incredibly traumatic, both physically and emotionally. Some of this couldn’t have been prevented, because we all know that pregnancy and birth can throw unexpected curve balls at us, and that it can become complicated even when things have been going smoothly previously. But some of what happened felt beyond my control and even now, years on, I feel that things could have been handled better.

I had very high blood pressure, leading up to the birth, and went into labor two and half weeks earlier than my due date, my body had decided it had had enough and was done. I was very swollen, retaining a lot of fluid and felt unwell. Because I was a first time mum delivering, the staff at the hospital told me that I would probably be in labor “for days” and that things would be slow. What I also didn’t realize at the time, was that the back pain and cramping i had been “walking off” and “breathing through” two days prior to going into hospital when my waters broke, was in fact early labor and I hadn’t slept much and was already tired. Because of my blood pressure, I was hooked up to machines, and pumped full of medicines and closely supervised by the staff. I can’t fault them for the monitoring, but I knew things were picking up the pace faster than they said it would, and I was feeling that the baby was coming sooner than they had predicted. I did keep asking for pain relief and saying that I felt that things were progressing fast but they were busy (it was the New Year weekend, they were short of staff and lots of babies had decided to be born that weekend it seemed) and they kept gently telling me it wasn’t time yet. Unfortunately, this lead to my actual delivery being rushed and unprepared for, and because they hadn’t checked the babies position, when she actually did deliver, she was in a complicated position and tore me very badly, both internally and externally. This caused me to hemorrhage and all I remember of those few minutes, is hold her briefly, then her being taken off me, handed to my husband (who was as white as a sheet, and terrified) and being whisked into surgery to try and stop the bleeding and repair the rather awful damage that had happened. It was all very quick, frightening and dramatic. I lost a lot of blood, needed a blood transfusion and three hours of surgery to stop the bleeding and repair the damage. 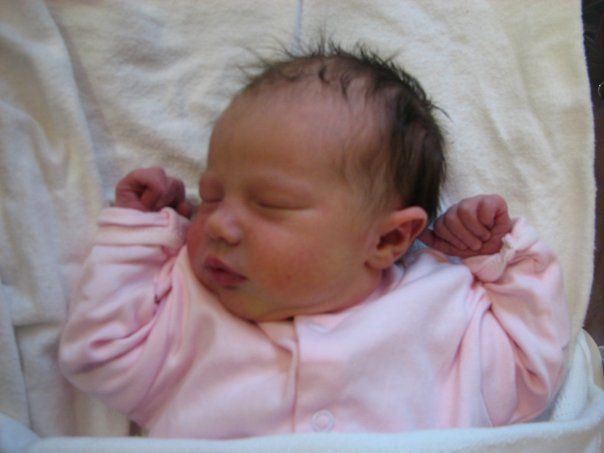 My daughter, 12 hours old. Not a clue what she and her mum had just been through.

At the time, we were just relieved that we both made it through, if not quite in one peace, but here. It took me many months to get over what had happened and the feelings that I hadn’t been listened to, that my body hadn’t done what it was supposed to and I felt, frankly, damaged.

I  do think there were things that could have been handled better. I knew things were going faster than the staff said they were, I could feel my body was working harder than they said it was, and I kept telling them that. I hadn’t given birth before, so I didn’t actually know what was going on, but I should have been heard. At the time I didn’t want to do anything about what happened, but now I would consider looking at medical negligence claims because I do feel that there were parts of my labor and delivery that were not handled well and that contributed to things going wrong. I will never know truly what could have gone right or even more wrong, but I do feel that women in labor and giving birth need to be listened to, and taken seriously when they say they think something is happening or they have a concern. What happened with my first birth made me very anxious about getting pregnant and giving birth again, and it took a long time for me to process and come to a place where it doesn’t upset me to think or talk about it.

I heard somene say once “the day you give birth is the most wonderful but also potentially the most dangerous day of your life”. I laughed that off at the time, but having been through a traumatic birth, I know that it is, sadly, quite true…

*this is a collaborative post. All medical opinions and views are my own*