I am a BIG FAN of social media. Social media has been my lifeline and my community when “real life” hasn’t been so good at being there to prop me up. I have some good relationships with people on social media, and admire many people who share their lives out there alongside mine.

Social media can be an amazing place. Just this past two weeks I have seen social media, and people from near and far, come together to support the family of a blogger who died, unexpectedly. People have raised money and shared some amazing and inspirational posts in her memory. Her life and social media legacy are something to be proud of.

But, I have also seen some horrific things on social media this week, and I am more and more convinced that people get brave behind a screen and think it’s ok to just say whatever is in their head, because the shock factor will get them more likes and follows and people cheer them on. It’s apparently ok to say things you wouldn’t have the balls to say in real life, because you are sharing it on your social media.

Remarks about homeless people. Attacking mothers who formula feed (it’s breastfeeding week, a good excuse for people to tell mothers how to parent and to give them a hard time if they don’t or can’t breastfeed, it seems, if some people’s feeds are to go by) remarks about people’s weight and body size, remarks about how people parent, comments about people’s eating and drinking habits. Racist remarks, anti semitic remarks.

I honestly think the people saying these things would not be brave enough to say them in real life, and that people wouldn’t laugh or pat them on the back (or at least I hope they wouldn’t, but my faith in humanity is a little shaken at the moment)

I can’t be bothered to address the people who are basically behaving like the mean kids in the playground, who seem to be able to get away with saying and doing whatever they want, and people clap and smile.

It’s the people who cheer them on that I wish would stop.

Someone makes a “funny” remark about a homeless person. Do you laugh, and like their comment, or do you remind them that they are mocking a section of society that needs our compassion and support not to be the butt of jokes on your social media?

Someone tells a mum who has chosen to formula feed that “she clearly didn’t do her research and if she really wanted to do the best for her baby, she would have tried to breastfeed”. Who do you back up? The person attacking another mother’s choices or the mum who is being told she is wrong for making that choice?

Someone makes a racist remark. Do you laugh and all pretend it’s funny and like and comment on that post or do you point out that it’s not acceptable?

If someone was saying these things in real life, who would you back?

Why is it ok to let loose on the internet if it’s not acceptable in real life.

A good friend of mine shared this on my Facebook when I asked about whether social media makes us braver than we are in reality. She is a bit of an expert on matters social media related and she had this to say…

‘The phenomenon has been backed up by a research, it is called the online disinhibition effect. Since the communication on social media has no physical cues (face expressions, body position, tone of voice) the interaction on both ends of the exchange becomes “hyperpersonal” or simply put, just more intense. unfortunately, the negative side of it is more powerful and just spirals out. Hence, because of the nature of the medium it is hard to stay genuine (nor nasty or saccharine polite) and not to be perceived rude.”

Social media has removed that personal barrier that allows us to realise that we are actually offending, hurting, damaging with our words and thoughts.

We need to do better. Social media is here to stay. It’s a great tool, but it’s also a vicious weapon and we need to be stronger when we see people using it to hurt or damage or just say stuff that in reality would get them punched in the face…

If I see you on my feed, being the mean girl or boy, I will report your post, I will challenge you, and I will not like or support you, just because you think you can say what you like… 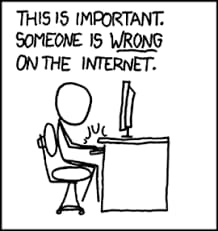 Posted in Everything else and tagged hiding behind a screen, internet trolls, online bullying, social media, we can do better.

Lord Lucan has been found, Prince Andrew is apparently bewildered, Huawei is taking over the world and then we will all die of Wuhan flu...
Excellent! https://www.bbc.co.uk/news/blogs-the-papers-51289847

How many times will I have to tell my child to get dressed this morning...
#realmumlife

People who say cats aren’t clever have clearly never had a cat climb onto them at 5am, to kneed the exact spot that is a full human bladder for 10 minutes, then go to the bathroom and bang the door with their bum til the human gets up to give them access to their litter tray...

Grommets? What are they? Tiny little pieces of plastic that literally revolutionised our life. I knew they could help children with ear issues and infections but seeing what they did to my own child was eye opening. Grommets saved us.