*We were kindly sent an item to review, all opinions are our own*

Yes, this blog post will talk about farting, bottom burps, passing wind, rude bottom noises, or if we are going to be techincally correct flatulence. Sorry, not sorry. We are talking about a game called “Pull my finger” after all.

I know when I was at school, the boys used to love to joke and ask the girls to pull their fingers then they would pretend to let off wind, with much hilarity.

Pull My Finger is a rather hilarious game that plays on that trick and takes it even further, from Jakks Pacific 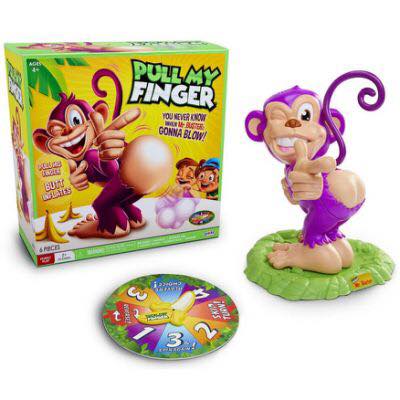 The concept is pretty simple. Each player takes a turn, and spins a wheel. You follow the instructions on the wheel for your turn and you pull the monkey’s finger, and his bottom, erm, well, it inflates. The more turns you have, the more times you pull his finger, and eventually… POP – Monkey lets you know, in a rather flatulent fashion, that he’s had enough! The aim is to see how long you can manage before he lets his wind loose, then you start all over again. Thankfully there is no smell involved!

It’s one of those games that appeals to children, because, well, it’s about farting, and making the monkey fart. I have a rather naughty sense of humour so I personally think it’s ridiculously funny too.

Matthew’s reaction when the game arrived, you can see he thinks it’s already going to be fun! We normally try to encourage being polite and not talking about bodily functions too much, as a family, so he was delighted to be able to play a game where farting noises were compulsory!

It’s very easy to set up and play, and the instructions are simple. The kids actually played it themselves and I just watched and laughed a lot, and eventually they let me join in.

This would make an amusing gift for somebody, or if you just want something a bit cheeky (see what I did there?) and fun. It’s a great game for kids learning to take turns too (that’s what I told the husband when he wanted to know why I was letting the children play the game!) Hours of silly fun, and a game that is easy to pull out and play again.