Like us, and many other families, you may be heading back to school this week or even starting school or nursery. You will probably have a long list of things to think about and head lice may not be on that list, either because it’s not something you have had to deal with, or possibly an element of denial.  (I can claim to be guilty of that one, to be honest)

Unfortunately head lice can occur in any family and it’s not something that happens when you have dirty hair. In fact they like clean hair. I have worked as a nurse, nanny and in childcare for many years and had my own children, and have learned a lot both professionally and personally (yup, we have dealt with the itchy little beasties in our house, too) about dealing with them but a lot of parents may not know what to do when head lice invade.

According to new research by Hedrin, infestations are a common occurrence amongst almost three quarters of families (73%), yet parents lack basic knowledge on the hair-hugging pests.

More than seven in ten (72%) do not know what first line of treatment the NHS recommends.

More than a third (34%) either have or would keep kids off school due to them having head lice.

There are common misconceptions on how head lice can be spread with a majority of parents believing they can be passed on by sharing hairbrushes, combs or hair accessories (82%), hats, coats or scarves (68%) and towels or bedding (65%). Half of parents (50%) believe head lice can jump a short distance from head to head, more than one in five (21%) are convinced that lice can fly a short distance from one head to another and one in six (16%) believe head lice can be spread by direct contact with pets.

Head lice expert Ian Burgess explains, “Whilst it is widely believed that head lice can jump from one head to another, head lice are small, wingless insects that are only spread by head-to-head contact, crawling from hair to hair. The type of lice common to dogs[1] do not actually survive on human blood, so it is not true that pet lice can transfer to humans, our head lice are different.”

On the topic of what lice like, a third of parents also believe lice prefer long (33%), clean (32%) hair and cannot live for longer than two hours when detached from a human head (37%), when in fact they can survive for up to twenty-four hours[2]. More than one in ten also believe that head lice prefer those with lighter coloured hair (11%), but these lice preferences are largely unfounded.

Ian adds, “Having lice has nothing to do with personal hygiene. Head lice can live on all types of hair and no preference exists between clean or dirty hair. Girls do tend to be more likely to get lice as they tend to play more closely together with greater head-to-head contact than boys, but there are still plenty of boys and men with lice! Using a preventative product whenever head lice are prevalent, such as during social activities and when children go back to school can help”

It’s little wonder then that the nation’s nit knowledge is lacking. Parents also reported feeling, or expecting to feel, a variety of emotions upon discovery of a head louse in their child’s hair, including stress (38%), dread (31%), worry (27%) and shame (23%). For some, the emotions or expected emotions of guilt (15%), helplessness (13%) and being overwhelmed (11%) were also reported. Parents are also concerned for the effects on their child with discomfort (50%), upset (43%) and fear of bullying or teasing (31%) considered some of the worst aspects.

With emotions high, extreme measures are being taken to prevent children getting, or passing on, head lice with more than a third (34%) saying they would keep their kids with lice off school or one in six (16%) refusing to send their lice-free kids to school if another child has an infestation, despite the NHS stating this unnecessary

Hair cutting is also a tested technique as nearly a quarter (24%) have cut their kids hair shorter and around one in seven (15%) have shaved their kid’s hair, in an effort to avoid head lice. Some desperate parents have even tried burning head lice with hair straighteners (4%), applying smelly garlic oil (3%) or gloopy mayonnaise (2%)!

Another popular measure is to treat the entire family (73%), even if head lice are only found on the child(ren), which could be adding undue stress. Ian Burgess advises, “Only treat if you find live lice on other members of the family. There is no need to treat ‘just in case’.”

One in ten parents believe the NHS suggests booking a GP appointment upon finding lice in a child’s hair, however this is actually against NHS guidance.

It seems there are still some misconceptions out there when it comes to “alternative” treatments, with some parents thinking tea tree oil (26%), lavender oil (4%), and eucalyptus oil (3%) can treat head lice infestations, however they are not likely to work!

For us, finding something simple but effective to help deal with head lice and is important. Having  a good comb and a treatment that works is one of the things on my back to school list. Even though we homeschool the boy, the tween is still around other children and could get head lice, and the boy and I are around lots of other children and families for work and also for homeschool activities so we are always on the look out to make sure we prevent or are able to deal with head lice if they do decide to invade.

Hedrin all in one shampoo is a very handy tool to keep in your bathroom to use when you spot the signs that there might be head lice in your kids hair (remember you need to check and treat the whole family) and it’s easy to use and works well. 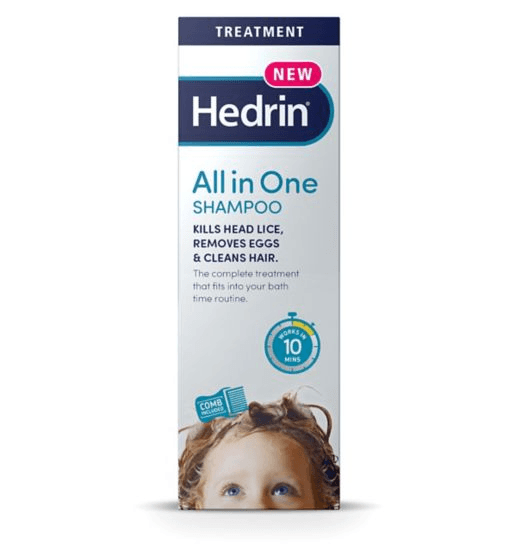 Can be incorporated seamlessly into bath time

So if you haven’t planned for head lice on your back to school list of things you need, then I would say you need to. Of course, you hope you won’t have to deal with them, but as I say, better safe than sorry, and be prepared so if they do invade you can deal with them easily. Don’t let them stress you out, they are easy to deal with if you have the right things handy, I promise.

Posted in Family Life and Parenting, Health and tagged back to school, head lice, Hedrin, how to deal with head lice, treating head lice.