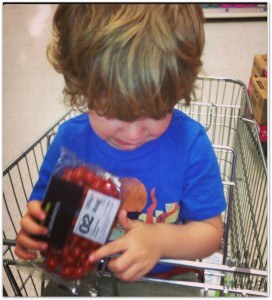 Over the years of parenting two children I like to think that I have evolved in my management of unmanageable situations and this is one, which although unpleasant, I felt a bit better about in myself after the event than I have done on previous similar occasions…

Setting the scene, Mom is resting and I suggest to Big Girl and Small Boy that we go shopping and get new balls for each as we lost Small Boy’s on a previous holiday.  Both were keen so off we went to our local supermarket.  We had to get a few bits and pieces as well as the toys and that was going well until I refused Small Boy some raisins (we had plenty at home).  This was a low grade tantrum and he came round after a few mins and we continued shopping (with hindsight I probably should have considered this in my later decision making).

We then got to the toy section…  Error, I let them walk past the balls and look at other things as I thought when I made a fuss of the really good ball selection they would come running over and choose a nice one each, Big Girl YES, Small Boy NO.  Small Boy had selected a small yellow shopping basket with some play shopping in it for his kitchen.  I explained that we were getting balls and that we couldn’t have said shopping basket.  Small Boy completely rejects ball and wants shopping basket instead.  Now I know at the back of my mind that if I get one a ball and the other a shopping basket 5 minutes after we get into the garden and start playing with the ball Small Boy will want his own.  On this basis I stick to my guns and we put the shopping basket back and the balls in the trolley.  Total meltdown ensues, picture small mushroom cloud… Small Boy is enraged on two fronts a) he can’t have the toy he wants and b) the toy he has rejected is setting in the trolley enraging him even further.

I pause to talk to how the general public are doing…  Hmm varying responses…  First a middle aged lady walks past and says “He needs a smack”, I say in medium volume “Come say that here lady” and needless to say she’s quite happy to disengage at that point and scuttles off.  An old man is engaging Big Girl and asking questions whilst I am batting off said lady but just picking up snippets of the conversation it sounded like he has prying and implying that I should be buying the toy Small Boy wants.  I wasn’t quite sure so I didn’t say anything but called Big Girl away.

We head for the till…  Fairly typical “walk of shame” with many looks of disapproval and displeasure, general lack of tolerance for what must be a fairly common experience in a busy family supermarket.

Personally at this point I am in fight or flight mode with adrenaline pumping, pulse racing but I still have not lost it with Small Boy and am just fighting my way slowly and steadily out of the trenches, first target till, second target car.  I really am not too bothered about the surrounding support or lack thereof, this is between me and him and if the world can’t cope with the odd toddler in meltdown then it needs to get over itself, I can’t possibly be expected to avoid every tantrum trigger.

We reach the till and thankfully the lady on the till has a nephew age three and at least spares me further ridicule.  I somehow keep Small Boy from diving into the trolley to throw away the ball that is enraging him and manage to pay.  We move onto the second target, the car.  I have the still erupting toddler over one shoulder and off we go.  Big Girl is being a star and pushes the trolley which was actually far too heavy for her and is going okay until we leave the entrance.  Trolley almost bumps into someone and we realise this is going to be tricky.

General public response jumps up a thousand percent and a kind lady sees us struggling and offers to push the trolley to the car for us.  Once there she says “You are doing well!”.  That was much needed help and encouragement and just shows the huge range of public response in these situations.  Second target reached.

After 5 mins I finally manage to get the car seat buckle fastened and Small Boy starts to run out of steam physically and emotionally (he’s probably been going about 15 – 20 mins now).  With sobbing and short breathes we head for home me and him exhausted and Big Girl generally okay.  We reach home and all starts to return to normal.

So what do I feel went better?

So what do I feel I could have improved?

– I should have factored in the earlier tantrum into my decision making, there is no way that Small Boy could get through two tantrums without a full meltdown.  I might have made the same decision but I would have more knowledge about the impact of that decision
Overall…  These things are hard but they are a fact of life for parents of young children.  I felt very sore after the event and it does place strain on your relationship with the child but not losing my cool and transferring anger out of embarrassment onto him made a big difference and limited the impact over all.

PS. Small Boy was playing quite happily with the previously rejected ball 10 minutes after getting home as soon as I was playing with Big Girl with her ball 🙂