Small Boy has reached that stage, where he is out of nappies and fully potty trained, during the day, but was still wearing a nappy at night, because he wasn’t ready to be without them, and was waking up in the morning, with a very full and wet nappy. We have been using a combination of cloth nappies, as we have done since he was born, and then when I went down hard with flu, and felt that washing nappies on top of everything else, was just not happening, we started using some disposable pull up pants, at night. He decided all by himself that “pants” meant being dry, and was physically ready to control his bladder at night and has been “dry” at night, now for almost two weeks. However, because I have potty trained a few children in my time, I know that sometimes accidents happen at night, if a little one is sleeping very deeply, and doesn’t wake up in time to go to the loo, so when we were offered the chance to try Dry Nites bed Mats, I jumped at the chance. The prospect of having to get up in the night, change wet bedding, and having to scrub and air mattresses and deal with the extra laundry wasn’t thrilling, and they claim on their website to offer that extra protection which we felt would be helpful. 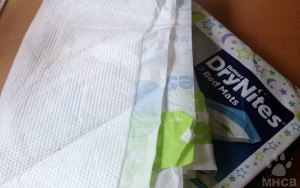 Normally, we would use a plastic mattress protector, and then a towel, under the sheets, for that post nappy, almost dry at night stage, but these mats are really handy. You peel off the backing tape, stick the mat to the mattress, put the sheet on top, and that’s it. No mess, no fuss, and unlike other mattress mats, because they stick, they don’t move and bunch up under the sheets, and they don’t rustle and Small Boy didn’t doesn’t even know they are there, when he goes to bed. We sent one with my Dad, to use at his house, when the children went to stay for the weekend, just in case, in a strange place, a leak or accident happened. Very reassuring for me, and also saving on extra laundry for Grandad too! 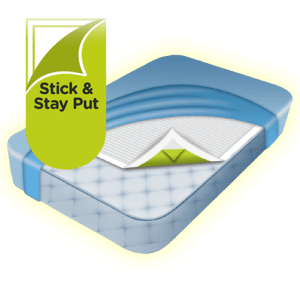 We have been very impressed, and have been using them happily for a good few weeks now, and would recommend them, to anyone at that stage of potty training and helping their child be dry and night, or for a child that might occasional have an accident at night, if they are heavy sleeper.

They are also very handy, during tummy bugs. I realised, when we unfortunately went down with one. I used one to protect the bed and pillows, for Small Boy, and although this is not there intended purpose, they did prove very useful.

So, Dry Nites are a great thing, to use for that in between stage, and for protecting your child’s bed and mattress. One less thing for us tired parents to have to worry about is always a good thing! 😉

*We were sent a pack of Dry Nites to try, all words and opinions are our own, we were not compensated financially for writing this post.

Posted in Everything else and tagged bed wetting, Dry Nites, Potty Training.