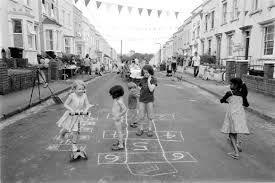 This is a parenting quandary, that I am trying to work out in my head, and with discussion and input from LSH. I thought I would talk about it on the blog, and see what other parents thought and do too.

In the next street, there is a family, that have children the same age as mine, and an older child aged 9. The 9 and 7 year old don’t go to school with Big Girl but we know them as almost neighbours and they are friends of friends. The 7 and 9 year old have come round several times recently asking if Big Girl can go play out with them, on the street, scooting, and roller skating, and to walk to the play park and back.

I feel like a paranoid, helicopter parent, because I have said no. Not because I don’t like the children or that I think they would get Big Girl and themselves into trouble, but simply because I don’t think she is old enough to be trotting off to the park without me, on her own, with other children.

Part of me feels confident in this decision and part of me feels like I am breeding fear, and being paranoid that something might happen to her. I feel like I had far more freedom as a child, and I am pretty sure I did. I was travelling on my own, at not much older, (well, as an unaccompanied minor, but pretty much on planes by myself, and at boarding school they encouraged independence and common sense very early) and I remember playing out with my much older cousins, when we were with them, at my grandmothers or uncles house.

She is aware of stranger danger, she knows not to go off with anyone, she knows her way to the park and back, she knows how to cross the roads safely. The mother of the children who want to play is lovely and sensible.

I just am not ready yet. I think she is too young, and despite my own upbringing and desire to foster common sense and ability to be independent in a healthy way, in my children, I am worried something will happen to her, and frankly, I don’t ever want to let her out to play, when I read some of the headlines, and news and articles that scare the pants off me, and other parents.

So, what do you think? Are kids not playing out any more? Why not? Are we too worried about what might happen to them and do we need to trust them more? When is the right age or is there a right age? What would you do if it was your kids? I would love to hear thoughts on both sides of the argument and what you do with your family.