*Warning – unpretty picture of infected tonsils coming up, they are not Big Girl’s but pretty much are what her tonsils looked like when she was suffering from an actual bout of tonsillitis. When she was “well” her tonsils were that swollen, and only a small gap between them was visible. Her adenoids were also swollen, and could be seen, behind the small gap left behind her tonsils. 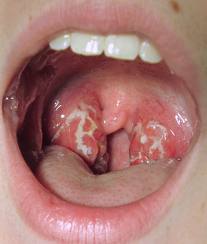 Big Girl had her first bout of proper tonsillitis nearly 2 years ago. She had in the past struggled with Spasmodic croup, which happened every time she was struck by a cold, and meant a trip to the doctors for medication, or me administering oral steroids at home. This had started to ease, and she was growing out of it, as is normal, most children grow out of it by aged 5 or so.

Her first episode of tonsillitis actually turned out to be Scarlet Fever, she started out with a sore throat, fever, feeling unwell, but woke up one morning with the classic sandpaper pink rash all over her chest and cheeks, and trunk. She was treated with antibiotics and resolved, thankfully, but from then on she had recurring bouts of tonsillitis, and in between, horrible colds, and reverted to episodes of croup, and also had a noticeable stridor, when she coughed or was upset from crying.

After a few bouts of tonsillitis, and treatment for it, I went to her GP and asked about the possibility of her having her tonsils removed. I was told that “most children grow out of it, it’s not severe enough, her tonsils are not that big, lets wait and see”. Most children do grow out of tonsil issues, and the NHS does take a wait and see approach, as research has shown that not all tonsillectomies are necessary. We decided to wait and watch.

Our tonsils and adenoids do an important job, and in a normal, healthy person, are part of the bodies initial defence and immune system.They don’t normally need to be removed. But as in our case, they were constantly enlarged and continually infected and were actually causing her health issues.

In January, Big Girl and I went away for a weekend to Butlins, and she and I shared a room. I barely slept for the two nights we were away. The snoring being emitted by my 7 year old was astounding. I also noticed that she was breath holding, and having episodes where she wouldn’t breathe for sometimes up to 15-20 seconds before gasping and breathing again. I had known she snored a bit, and it was a slight joke in our house, that she could snore as loudly as LSH, but it gave me quite a fright, to actually witness it, and hear it all night, so consistently, and I was very, very concerned,  and as soon as we were back in London, I contacted our GP, with my concerns. He was happy to refer me to see an ENT surgeon with her, and because the waiting time was so long, we decided to use our private insurance cover, provided by LSH’s work. We are very fortunate to have this, because if not, we would not have seen the ENT specialist until at least June, of this year. I was not prepared to wait that long. Having waited out and been pushed around by the health services for Little Man’s ears, and the horrible time we had, I was very firm that if we used all our cover, for this issue to be resolved for Big Girl, then so be it and LSH very much agreed with me. We also had the backing of our school,we had a letter stating how much time Big Girl had missed from school due to recurring bouts of tonsillitis, and each episode of missed school was due to this. Whilst she is still only at primary school, our concern was that she was missing important input and time.

So, off we trotted to see the ENT surgeon. He chatted to us, asked us questions, then offered us two options. We could try a course of very strong antibiotics, and give Big Girl six weeks to see if that resolved the issues, or we could opt to have her tonsils removed. I asked him what the success rate of the antibiotics was. His reply was 50%. He then examined her, and after peering down her throat, turned to me and said “Mrs Reekie, to be honest, I would say there’s a good chance those meds will probably not work, for her, those tonsils look horribly large and her adenoids are also rather large and probably obstructing her airway when she is asleep, if you are happy, I think we should proceed to have them both removed, as soon as is possible”.

I am not one to query when as doctor says things like “horrible”, “large” and “as soon as possible”. They don’t whip out tonsils for fun, these days, so we started the process to get them removed.

Last week, she had the operation, and had both her tonsils and adenoids removed under general anaesthetic. She, herself is going to write about what happened, and share with you about how she felt, so I won’t add any more details, but when the surgeon came round after the operation, his words were “I think it was a good thing we did that, they were huge,  horrible and pretty rotten inside and her adenoids were starting to obstruct her airway”.

We knew the risks, and I must admit, I had some serious wobble moments the week leading up to the operation, because it’s not a light decision to put your child under anaesthetic, the risk of bleeding, and then pain and recovery afterwards, but in my gut, I KNEW she wasn’t right, and that this would be something that was very much needed, so when he told us that, the relief, and also vindication were there, along with the parental guilt that she has clearly been struggling for a while, and that they really have been causing her issues.

It’s not just pain, and tonsillitis, that have been the problem. Because she hasn’t been sleeping well, due to her snoring, and likely mild sleep apnoea caused by the large tonsils and adenoids, she has been constantly tired, and not herself. My bright, bubbly, energetic girl has been pretty tired, whiny, clingy and just off for a good year. We partly put it down to her struggling with my having issues, a side effect of all the sleep issues of her brother, being 7 and struggling with the whole growing up but not being there yet, and also there have been some issues at school, with a teacher, who is not easy to be around, and we thought this was making her anxious and more tired too. She also complained constantly of aching legs and knees. I blamed growing pains, then got her checked out by the doctor who also blamed growing pains, and also the fact that she swims and does a lot of dance classes, and that it was just muscular. He did run some basic blood tests, and said there was nothing out of the ordinary, other than mild signs of an infection (she had a bout of tonsillitis ad the time of the tests so he blamed that) but it also turns out that children with chronic tonsil issues can have aching joints, so my poor girl was not just being whiny, she was really struggling. I have to say, I have been dealing with some major guilt since we were told this, I had no idea, and feel terrible that she has clearly been under the weather, but because we have been so bogged down with her brother and his sleep issues, now resolved that she has been rather neglected. The ENT surgeon did reassure me that it would resolve, much to our relief.

So, we took the risk, we opted for the surgical option. We knew that she would be in pain, and off school for two weeks, and that we would have to look after her, help her and also both take time off. Fortunately, she has had a text book recovery and almost 10 days post op I can tell you that once again, we have no regrets, that I followed my gut, and that we took action.

I know some people have asked why we have chosen to go this route, and in fact I have had some private criticism, and also some face to face. I don’t usually feel the need to explain the decisions we make for our children, but as with what we went through with Little Man’s ears and the issues we had, I felt that sharing about our experience might help other people, as well as provide more information, hence this blog post.

Most importantly of all, Big Girl knew what was happening, we explained everything to her, we shared what we had been told, the ENT surgeon was very good with her and told her why he thought she needed the operation and she herself decided that she wanted it done, and seeing how much healthier she already is, and that I have almost got my girl back to normal, after such a long stretch of time, knowing she is already feeling better, and that this will have been huge benefit to her, outweighs the possible small risks and the inconvenience. She says she is very glad we did it, and that’s what counts. This option may not be the right one for your child, but for us, it was and we once again, have no regrets, and I would always encourage parents to go with their instincts, trust their gut, and if you are not happy or have concerns about your child’s health, don’t be fobbed off. We are very lucky to have a free NHS service this country, but cost cutting, time constraints and other issues mean that sometimes things are not prioritised, and we need to make sure we advocate for our children, to make sure they are getting the best and most appropriate care.

*Disclaimer: This post is a personal post, not medical advice  and as usual, I would suggest seeking appropriate medical information from a qualified health practioner if you have concerns about your child’s health*