You know that familiar sound? The tinkle tinkle of the music, from an ice cream van, as it meanders along the street, enticing children (and adults) to come and buy sweets and treats? I think they are creepy, and I really don’t like them. 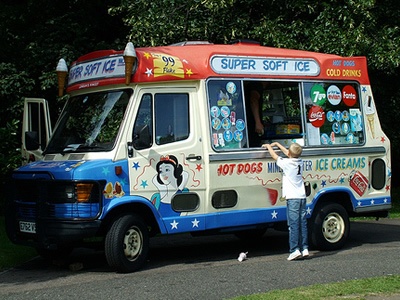 I don’t know why, I loathe this vans seemingly full of promise, and sugar laden goodies. I am pretty sure I loved the ice cream van, when I was a child. It was a huge treat, for us, because mainly living abroad, we didn’t see them often. When we stayed with my Nana or my uncles, to be given some money (and compared to today, 50p went SO much further, I don’t think you can actually buy anything from an ice cream van for 50p now) and to be able to join the crowd of other children and some adults, and choose a sweetie or an ice cream, to enjoy, in the summer, when we were all playing outside, or as a Sunday afternoon treat.

Now, I hate them. I hate that they come round, either just before the children are about to eat supper, or as I am putting them to bed and the inveitable pester power attack starts… “can we get an ice cream, or some chocolate from the ice cream van?” I don’t know how they know that this is what happens, because we have never actually gone out and bought anything from a van, I blame things they watch on tv, personally)

I hate the twinkly music, it’s creepy, and sounds like something from a Stephen King movie, (not that I have watched many of those, but I can imagine) and frankly it’s annoying, trying to ignore the noise and the pleas of my children. I don’t think ice cream vans have the same charm and delight that they held for me, when I was a child. Maybe it’s because the government has pounded into us that all things chocolatey and sugary are evil, and I feel the pressure not to cave and let them go and buy something, or just annoyance that an external “factor” in the shape of a multi coloured van, with annoying music disturbs my day, most days in the summer (and we even have one come round in winter, when it is dark, which I think is very weird, according to a friend of mine those vans don’t just sell sweeties and ice cream, if you get what I mean, which I hope is not true, but wouldn’t surprise me)

When I mentioned my dislike of ice cream vans on Facebook, I was surprised to see I wasn’t alone. This made me feel so much better. I feel pretty mean, because I am sure that the majority of ice cream van drivers are lovely people just doing a job, and I have never actually in my life come across a nasty or mean one. I just don’t like the principal of someone driving up and down our road, calling my kids out to buy sweets, like some sugar candy pied piper. A friend of mine shared this clip, which is a bit horrific, and enough to put anyone off. I know that that ice cream van drivers aren’t really like that.

So what is it, that makes me feel this way? Do you like or loathe ice cream vans? Would you like to see them banned or are they a part of summer that you think is traditional and fun or are you very bah humbuggy about them, like me? I would love to hear what other people think…

Please do not copy my work, or use my photos. Thanks © 2015 karen reekieAll Rights Reserved
Posted in Family Life and Parenting and tagged childhood, ice cream vans.