I am THAT mother. After almost 8 years of parenting, and figuring out how to handle two children with very different personalities, I have worked out that picking your battles, is the best way to manage.

A friend of mine shared this picture on Facebook. 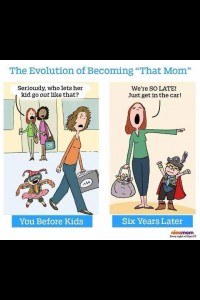 Yes, there are some things we don’t negotiate on. My children know, that they sit in their car seats, and if they undo seatbelts, or try and get out of them, during car journeys, there will be consequences. We have actually stopped, on a safe side of the road, and had a stern conversation with a child, about what exactly will happen if you aren’t strapped into a car seat, and an accident happens. I didn’t mince my words. The one attempt to undo and climb out of a seat, whilst the car was in motion, was the only ever attempt. The same applies to crossing roads. We hold hands, we walk together. We learn road safety. Cycle helmets must be worn, or we don’t go on our bikes. Basic stuff, hardly unreasonable.

We don’t negotiate on stuff like teeth brushing (we might try and make it fun, but it happens, twice daily, whether it’s liked or not) When they are old enough to pay their own dental bills, they can do what they like teeth brushing wise, but for now, teeth brushing happens. We don’t negotiate on basic manners, saying please, thank you, excuse me, not shoving, pushing or being rude. We have reasonable expectations, dependant on age, and ability, on how we behave when eating out and other things.

One thing I have learned to just let slide, ever so slightly, is clothes and what my kids wear. When they were babies, they wore what I wanted, because frankly, babies don’t care, as long as they are warm or cool, and comfortable. When Big Girl was about two, she started to express her thoughts on what she wanted to wear and it involved a pair of pink Wellington boots and a fairy dressing up dress, that she had been given. She basically wanted to wear those two things, every day. After a few weeks of battling, tears, and drama, getting dressed each day, I finally decided that it wasn’t worth the fight. I started to work on compromising. It was the middle of winter, so she could wear the fairy dress, but she had to have a t-shirt underneath it, and wear a jumper. She went out happily, was clothed warmly, and it made life less stressful, when I was newly pregnant and feeling like death on a plate, all day, most days, not having to debate clothing with my two year old made life much easier.

Now, within reason, I don’t bat an eyelid, when my children make clothes choices that are not “my ideal”. My seven year old is learning to chose what she feels comfortable in, and what she thinks looks good, and my four year old goes through stages where only certain t-shirts or his Spider man outfit will do.

We have rules – if it’s cold, then they do have to think about that, and put something warm on. I am OK with a Spiderman outfit, if Spiderman wears a coat or a jumper. If we want to go dressed out like a pirate, and it’s raining, that’s fine, but a raincoat will be required. If we want to wear wellies with no socks, then we get sweaty feet, and little sympathy from Mum. I also do make sure bottoms are covered. I refuse to let my 7 year old wear shorts or skirts that are so short they are pretty much not considered outerwear.

So, sometimes, in fact, a lot of the time, I am THAT mother. My child might be wearing Wellington boots, when it isn’t’ raining, or sporting a superhero cape, or  a pirate outfit, or wearing leggings that don’t match what they are wearing on their top half. I have had a few comments, but I find the reply of “would you like to come round tomorrow and dress my child, whilst I have an extra half hour in bed, drinking my coffee, listening to you battle over what they wear?” wards off most people.

In fairness, we do do basic things like laying clothes out the night before, getting them to help choose when buying clothes, letting them choose between outfits, if we are going to a special occasion, where dressing appropriately may be required, and also I don’t make my children wear things they don’t want to. Little Man has sensory issues, he won’t wear jeans, or trousers with seams, and HATES labels that tickle or touch his skin. He also won’t wear woollen things. I am not going to make him. I also don’t like those things. No one died because they didn’t wear jeans or that woolly jumper great aunt Gertrude knitted.