That’s right. You read correctly. Not only do I loathe party bags (I am sure I am not alone in that one) but we don’t do them, for parties we hold for our children. Why? Read on…. 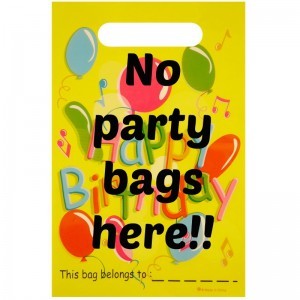 The recent article on how a mother is taking another parent who failed to send their child to a party that they had RSVP’ed to, to the small claims court to claim back the cost of the child’s place at the party, got me thinking. You can read about that here.

I will say I can see both sides of the story. I think the family who just didn’t turn up and didn’t contact the host family to say they weren’t coming after saying they would, were very rude, and frankly in this day and age it’s not hard to get a message to someone to say you can’t make it, and I get that the host was frustrated because nothing drives me batty more than people who don’t turn up to things when they said they will, without a reasonable excuse, and in different circumstances, would she do the same? However, I don’t know the back story or what was communicated other than in we have read in the media, so I can understand why both are angry about it. I hope this is now not going to start a trend of parents suing other parents for not coming to parties, given how some people behave, it wouldn’t surprise me.

That being said, it got me thinking, about how we handle parties with our children. We actually are a bit different from the norm, it seems and we tend to make our parties low key affairs, and we don’t do party bags.

We did once, for one of Big Girl’s parties, I think when she was 4, and I decided after that that I was never doing them again. I HATE party bags. I think they are a ridiculous and unnecessary expense, and I hate the sense of entitlement that we are breeding in our children that they HAVE to have something to go home with, after a party, when in fact, the party isn’t actually about them. We have had many a meltdown from child a when child b comes home from a party with a bag and the other child didn’t get one because they didn’t go, and I have been been to parties where they have made bags for siblings which is very kind, but also, frankly ridiculous. The whole notion of party bags has got out of hand, and I have even known parents trying to one up each other, over them!

I am a bit of a stubborn soul, and like to go against the grain. We are becoming a society that is simply “give me, give me” so I have decided that where party bags are concerned, for parties I host, there won’t be any. I think children have got used to party bags as a must, and parents are catering to this, and I don’t want to be one of them.  To my mind, the party should be about the birthday child and their friends having a good time, some fun, lots of cake and nice food, and enjoying whatever activities are planned. Children having meltdowns at the end of a party about a party bag or what’s in it (and I have seen this happen many times in my career both professional and as a parent) is sad and disheartening.

I was chatting to a mum today, who spent £200 on just party bags, for her child’s most recent party. That’s just over £6 per bag for a class of 30 children. That’s madness, to me, and I am hoping is on the expensive side, for party bags, but I am sure isn’t. I know some parents who don’t spend even a quarter of that, but to me it’s still a waste of money.

The amount of money parents spend on parties scares me, and party bags have become a real thing, that adds to that cost. To be honest, the actual hassle of shopping for stuff for them, making sure you have the right amount, checking that children aren’t allergic to the contents, and all that, is way more than I am prepared to do, when I already have a cake to make or arrange, and all the other things that come with arranging a party. Yes, I could go and buy them ready made, or rummage round the pound shop (and I LOVE a good pound shop rummage, just not for party bag contents!) but I refuse to.

At the end of the party, each child gets either a balloon if we happened to have them at the party, or a lollipop and a piece of cake to take home. No party bags! Any whining or moaning by party guests is treated with a “it’s nice to come and enjoy a party, here, have some cake” and the rest of the whining is ignored. I have had a lot of parents tell me they think I am very brave for choosing this, I am not sure I would say it is brave, rather a choice not to conform to an expectation that has got out of hand and unnecessary.

Why don’t adults get party bags? I think the next birthday party we go to, as adults, I am going to have a storming strop, as we leave, if I am not presented with a little plastic bag with a toy, some bubbles, some chocolate or Haribo, a suitably chosen item for my gender and an annoying whistle or party horn type thing in it… 🙂

I am sure loads of people reading this will think I am a terribly mean parent, and harsh and possibly judging my fellow parents who choose to spend money on party bags. Maybe I am being mean? Or maybe it’s time to come back to reality and make birthday parties fun and not about what you get out of it at the end. I don’t remember getting many party bags as a child, taking home a sticky parcel of cake to eat in the car, was as good as it got. Why is that bad? Why do children need that little extra “something” after they have played games, probably won a prize, eaten their own weight in crisps and sweets, with odd sandwich thrown in, and generally had fun?

If other families want to have party bags, that’s fine with me (but I will tell you I am a mean parent and the contents of most of them are usually binned within hours of entry into our house, before a cat eats them, or they get under my feet in the dark, after they have been opened, examined, fought over and discarded and yes, I even eat the sweets :)) but there are no party bags here!

What do you think? Party bags are a MUST, I am socially unacceptable by refusing to give them out? Or do you hate them and refuse to partake? What do you do if you don’t give out party bags? How much do you spend on them if you do organise them?