I don’t often write blog posts about the cats, even though they are part of the reason why the blog is named the way it is. I thought, however, that I might share Layla’s story with our readers.

Layla came to us, unplanned. We had been thinking about getting a kitten, but because I was working long hours, we weren’t ready to take on looking after a fur baby, at that time so hadn’t really started looking seriously. We weren’t sure if we wanted a moggy or if we would get a pure bred cat.  I secretly wanted a Siamese, a Burmese or a Rag doll kitten. One of my friends rang me though one afternoon telling me she knew someone who had kittens and “wanted rid of them quickly”. That very expression concerned me, as a cat lover, so I thought I would check out the situation and see what kind of kittens they were.

It turns out that the mother of the three kittens in question was a Persian, but had escaped from her house and got friendly with a local moggy tom cat. The result was three non pure bred kittens, and the owner didn’t want them, and wanted to find them homes as quickly as possible. She had already made them wean and they were living in a shed, in her garden. She had found homes for two, but the smallest, the runt, she hadn’t. I went to see them, and there and then, said we would take the runt. I couldn’t leave her, in a shed, weaned before she should have been, to who knew what fate. That experience put me off cat breeders for a long time, although I do know that most cat breeders are caring and responsible. I really don’t know what would have happened to her, and it still makes me sad that she wasn’t planned or wanted, and they wanted rid of her as fast as they could.

So, I rushed home, and got some kitten things ready, and told LSH that we had a kitten coming home. The poor man came home to a bundle of fluff that he hadn’t expected. My friend found a cat box and went to get the kitten, and she arrived, that evening, tiny, terrified and desperate to be loved. It took her about two days to come out from her box, other than to eat a small amount when no one was around and use her litter tray. I took her to the vets, and she was pronounced “well, but weaned too early” so I had to feed her special kitten milk, three times a day, as well as making sure she was eating and being kept warm. I spent those first two weeks, sleeping on a sofa, with her curled up in my neck (she still tries to do that) and she would cry if I left her.  We alternated being at home, with her until she settled in and was happy to be left. 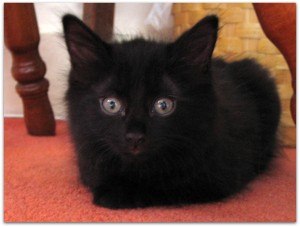 She has inherited her traditional Persian mum’s ears and eyes and tail,  and long haired features, but we think some of her dad is in there too in her colour. She is technically chocolate coloured, a very dark brown, although she looks black in photos. Traditional Persians don’t have very flat faces.

We called her Layla, because I am a huge Eric Clapton fan, and love that song. It seemed appropriate.

I am so glad I went that day, to meet those kittens. I am a total soft touch, and have no regrets. One of the reasons she is a little taciturn and unsociable is probably because she was weaned too early and not handled enough to get used to humans, but we love her grumpy personality and she really is MY cat. I am the only one she will cuddle, allow to handle her, and when she is unwell, I am the only one who can look after her. She has strange eating habits and prefers human food over cat food, if given the option (she’s the only cat I know that likes Thai Green curry and tomato soup) and she has softened as she has gotten older, and I think may finally have forgiven me for bringing two children into her life although I don’t think she has ever gotten over Jasper’s arrival! 😉

So, that’s Layla. She’s grumpy but beautiful, she doesn’t love anyone but me, but I wouldn’t change that for anything…. 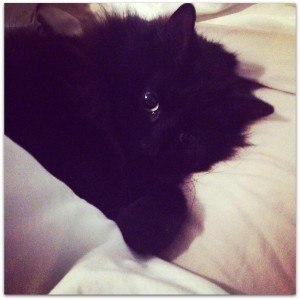 Posted in Family Life and Parenting and tagged adopting a kitten, cats, pets.