I don’t post often about the cats, but after sharing last week about how Layla came into our lives, and getting some nice comments I thought I would share a little more about her. She is no ordinary cat, in fact, our vet regards her as somewhat of a miracle kitty and when she goes to see him for check ups, he calls in all his student vets (he’s a very well known, and experienced feline specialist) and colleages to talk about her and share her case history.

You see, Layla was supposed to die. She wasn’t mean to survive, an illness that kills most cats and kittens. But, as you can clearly see, she proved everyone wrong and is still going strong, today, despite the gloomy predictions so long ago when she was still quite young. 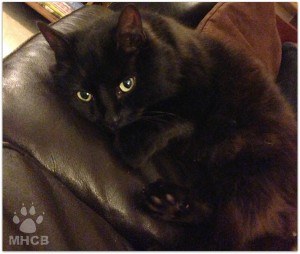 When Layla was about 10 months old, she suddenly became very, very unwell. She wouldn’t eat, and started vomiting and had horrible diarrhoea, and very quickly became listless and unable to walk. We only lived a few minutes away from our vets so I rushed her round there, and they admitted her for treatment. They weren’t sure what was wrong with her, and ran a battery of blood tests, and an ultrasound and x-ray to see if they could work out what was wrong. They thought she might have eaten something that had poisoned her, or picked up a virus. As she was an indoor cat, this was soon ruled out.

I went to work, because there was nothing I could do, and she was in very capable hands, with the vets and  nurses, and waited for a call from them to tell me if they knew what was wrong.

The call was not what I wanted to hear. The vet told me, in a very sad voice, that Layla had all the signs of FIP or Feline Infectious Peritonitis, and it was highly likely she would die. There was very little he could do for her, except give her fluids, and steroid treatment. He told me to come and see her and speak to him, when I had finished work. I went through my day in a blur. Layla was my baby, my fur baby that I had nursed and cared for from 6 weeks old, and we adored her feisty, somewhat grumpy personality.  I was devastated. I rang LSH in floods of tears and he was also very upset. When you read anything about FIP you realise how serious it is, and that it’s unlikely a cat will recover, and it is a horrible illness for a cat or kitten to suffer from. It’s spread from other infected cats via another virus Feline Corona Virus, that mutates. Lots of cats carry this virus, and not all get sick. It’s likely that Layla caught it from her mother, and it lay dormant, and something triggered the virus to make her so ill.

I arrived at the vet, and then nurse took me to see Layla. She laughingly told me “she’s a bit of a grumpy girl, we had to move her away from the other cats” , because she was infectious but also very vocal in her disgust at being incarcerated at the vets. She told me Layla wouldn’t let anyone handle her, to clean her up, that she had been terribly sick, all day, and she also told me that she hadn’t used her litter tray, and they wanted to try and get a urine sample but didn’t want to hurt her, or cause her more stress by inserting a catheter in her bladder, and they were worried her kidneys were failing, but the vet would come and chat to me, shortly. I went in, and opened the cage, and this very soggy, sick covered, bedraggled looking cat crawled into my arms, growling and crying. She also promptly peed all over me which made me laugh, in amidst all the worry.

She lay in my arms, trembling and looking terrible, as the vet came through and told me what was happening. He told me all about FIP and what the prognosis was, and that basically he could do nothing more, but send her home with medicines to keep her comfortable, and that she probably would die, “in a matter of days, if not weeks”. They gave me anti sickness medicine, antibiotics, steroids and pain medication and we sadly packed her into her basket and took her home. I cried all the way home, and cried even more as I cleaned her up and gave her the medications she needed. She lay on my lap, or in her basket, panting and growling, and occasionally trying to be sick, and I spent most of the night sitting up with her, trying to get her to drink a little bit of water, and keep her warm. I didn’t have to be at work for a few days, so I spent time with her, keeping her comfortable, and watching over her. The vet had told me she would probably just go to sleep and not wake up, at some point but that if she got much worse, or I couldn’t handle caring for her, to bring her back and they would put her to sleep. For some reason, I wanted to wait it out for a few days. She wasn’t getting any worse, even if she wasn’t getting better. The vet nurses and vet were terribly kind and rang every day to see how she was and if we needed anything. It was a horrible, sad time. I kept going to check on her, expecting her to be dead, or dying.

After about a week of this, she suddenly started to perk up. She actually seemed to want to eat, more than the tiny bits of mushed up chicken I had been almost forcing into her, and she got up and went to her bowl, at a good few mouthfuls, then walked around the house, then cleaned herself. I rang the vet in delight. He was not hopeful, and said that this was probably just temporary and the medications tiding her over, and that she would get worse again.

To everyone’s surprise, two weeks later, she was almost back to her normal self, eating, and gaining back the massive amounts of weight she had lost. After a month, I took her back to the vet and he was amazed. He still wasn’t totally positive tht she would survive long-term, and kept telling me “only 10% of cats ever make it past 3 months with FIP and they don’t have a good long term prognosis” but we soldiered on and she continued to get better and stayed well. After 6 months, we went back, and she had some blood tests and although she has FCV antibodies in her system, and trace titre of FIP, the levels are so low, they are regarded as dormant. The virus could be triggered and return at any point, but to be honest, given that we were told she would die within days if not, weeks, almost 9 years ago, now, we will face that when it comes. She is a happy, healthy for her age cat and although we have to minimise her stress levels (which is a bit of  joke, with another cat and children around) and watch her, if she does become unwell, if you met her, you would not know that she was not meant to be here. She is currently part of a research project and trial of  a medication that might prove to be useful in treating FIP and related illnesses more successfully in the future and she has regular blood tests to see how her immune system is coping but for now, she is the 10% kitty and slightly infamous, within the veterinary community. Our vet says he has never seen, in his career a cat survive FIP with the levels of virus she had in her body. She was not meant to live, very few cats do survive this dreadful illness but clearly she didn’t make it through her tough start in life, to be beaten by something that would kill other cats. I feel very strongly that anything we can do to help cats and their owners going through this illness and find a cure is important, so if you would like to donate to help you can do so here:

That’s the story of the 10% cat, she might be grumpy, but she is also a bit miraculous too! 😉

Please do not copy my work, or use my photos. Thanks © 2015 karen reekieAll Rights Reserved
Posted in Pet's Corner and tagged cats, FCV, Feline Infectious Peritonitis, FiP.