There, I said it. I hate raisins. 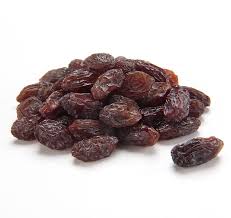 They are nasty, sticky, shriveled up bits of fruit, that children and adults seem to love.

I can’t stand them. I don’t like them in sweet or savory foods. I will avoid meals that contain them. The only thing I can tolerate them in is a well-made fruit cake or Christmas cake. I object to them being in my curry or my scones. I won’t eat cereal bars with them in, and I pick them out of fruit and nut bars…

Why is this a problem you say? It’s not like you HAVE to eat them!

I run toddler groups and raisins are a staple snack, that we serve. They are cheap, and sweet, and whilst not considered the least sugar-free item, they are an ok snack for little ones. Both my children like them to (the freaks!!) and every week I probably handle hundreds of raisins, as I serve them up, then clean out bowls when washing up, or pick half-chewed ones off the floor (raisins ground into carpets or flooring actually makes me gag!)

I have tried to introduce other alternatives to the kids at the groups, but strangely enough, they aren’t keen on dried cranberries, and dried apricots and the like are a bit of a choking hazard, so we seem to be stuck with my much-loathed nemesis, the dried and shriveled grape.

I don’t know if it’s the texture, the smell, the taste, the fact that they closely resemble animal droppings, who knows? I just don’t like them. I am contemplating donning gloves to serve them out, so their stickiness doesn’t get near me.

My colleagues and fellow volunteers think I am ridiculous and laugh at me, but I tell you, it’s a real problem. I struggle on, bravely wincing as I dish out handfuls into bowls for snack time, or picking them out of the carpet, or even having half-chewed mouthfuls of them handed to me, by otherwise cute and endearing children that come to my groups, because, hey, nothing says “I like you, adult that I am getting to know” than spitting a mouthful of half masticated raisins into their hand…

As far as I am concerned, the only good raisin is one that has been saved from its fate and turned into wine… 😉 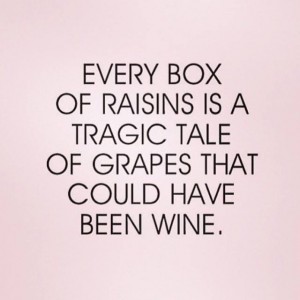 Does anyone know what raisin phobia is called? I am sure I have a genuine case of it!

*Update. Apparently having a phobia of raisin is called inyaphobia and it is a real thing…*